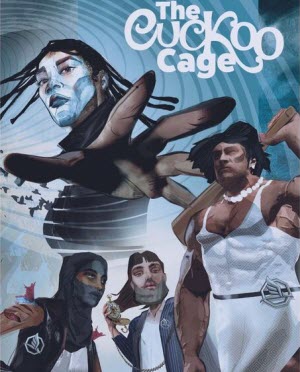 Those of you with a fondness for interesting short fiction will doubtless already know of Comma Press. They have published two collections by M John Harrison. They have also done three anthologies of translated SF, one by Palestinian authors, one by Iraqis, and one by Kurds. I think the way they first came to my attention was with a book called When It Changed. Edited by Geoff Ryman, this pulled together a number of top-class science fiction writers paired with bleeding edge scientists. The idea was for the scientists to provide ideas for the writers to explore.

I am reminded by that thanks to their latest foray into speculative fiction, The Cuckoo Cage, which pairs historians with writers who have an interest in social justice. The idea is to take social justice movements from the past, and to use them as inspiration for creating modern day superheroes.

The historical examples tend to be people who are protesting against unfair taxes, against illegal enclosure of common land, and against loss of traditional working patterns to industrialisation. Thus we get people like Lady Skimmington, the Luddites and Captain Swing, though there is also a story based on the ancient British leader, Cassivellaunus, who led the resistance to Julius Caesar’s invasion. And there’s one about the crew of a British Navy ship who mutinied against a tyrannical captain.

The writers are mostly non-white, which is somewhat inevitable when addressing issues of social justice in modern Britain. The two I am familiar with are Bidisha, a feminist journalist and film-maker; and Courttia Newland, a Black writer who produced the science fiction novel, A River Called Time, but is these days better known for having been one of the scriptwriters on the TV series, Small Axe. Newland’s story is set in Bristol and is about a superhero who destroys racist statues, which is entirely appropriate.

What is, perhaps, somewhat missing, is knowledge of the superhero genre. Editor Ra Page’s introduction exemplifies this by stating that, “the American superhero props up a reactionary, pro-capitalist view of the world.” While that might be true of Bruce Wayne and Tony Stark, it is a rather sweeping statement that ignores a lot of what comics writers have tried, if not always succeeded, in doing over the years.

The writers have been asked to produce origin stories for their creation, that being a traditional part of the superhero oeuvre. Some of them get it, others have produced stories that are interesting and fit well with the historical inspiration, but don’t quite seem like superhero stories to me.

Nevertheless, these are all good stories, and if you haven’t spent your life immersed in the Marvel Universe you will be less sensitive to such issues. If you are a fan of short fiction, interested in social history, or keen on experimental anthologies, this book will definitely appeal to you. If nothing else you will learn some history. I had no idea that there was a protest movement whose adherents signed themselves, The Servants of the Queen of Faerie. I was vaguely aware that there was a small town in England called Gotham. I did not know that it is near Nottingham and that they rebelled against King John by feigning madness. And I certainly didn’t know that there is a 1540 book collecting tales of their actions called The Merry Tales of the Mad Men of Gotham.

American friends, the correct pronunciation of the name of the town is Goat-Ham. I think we should all use that from now on.