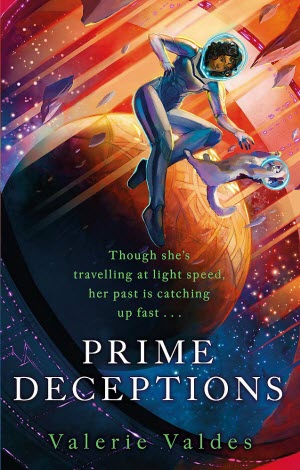 This is the second volume in Valerie Valdes’s series about Captain Eva Innocente and her crew of semi-illegal misfits. Much of it is very much the same fare as book 1. Indeed, the main plot is remarkably similar, only it is another one of the crew’s siblings that needs rescuing. How things work around that is rather different.

You very quickly get the impression that Prime Deceptions is massively meta, in that it is one long sequence of in-jokes about geekdom. The very first chapter is called “Kick the Puppies”, which I’m sure is not entirely an innocent(e) coincidence. There’s also a chapter called “Throne of Games”.

There’s more. Early on in the book the crew get to visit Evercon, a continuously running geek convention being held on Charon, the moon of Pluto. There they have to get to grips with the local politics, which involves rivalry between various sub-fandoms. Apparently the fantasy furries hate the sci-fi furries, and the mediaevalist re-enactors are having a big row over whether elves are authentic, and so on.

Later on they get to visit a planet famous for its version of Robot Wars. Naturally the crew ends up having to enter the competition. This segment also sees the return of the infuriating Miles fucking Erck, the man who begins every sentence with the words, “well, actually”. I’m assuming that Valdes brought him back because she hadn’t managed to do enough bad things to him in book 1. Quite right too, he deserves it.

The majority of the book is spent on a planet called Garilia where Eva has some unfortunate history. This allows the plot to get fairly serious for a while. The crew get involved in some decidedly dodgy local politics, and in a plot to conquer the galaxy through the use of what are clearly Pocket Monsters, though for obvious reasons Valdes can’t actually use the word Pokémon.

Finally there is a massive space opera set piece involving a star gate which I won’t say too much about because it would be spoilery.

All in all, these books are great fun. They are very much fan service, but not every book has to be deeply philosophical and you can still make important points while cramming in as many geek references as you possibly can.

Oh, and the psychic cats have a somewhat expanded role in this book, which is obviously good.