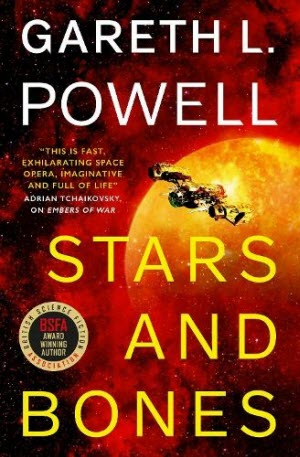 A new Gareth Powell novel is always a matter of interest in these here parts. Stars and Bones reads like a stand-alone, so it may be a good point for those of you who haven’t tried Gareth’s work before to dip in and find out what he’s about.

The book is set in a future in which humanity has been rescued from its own stupidity (and in particular from the stupidity of a bumbling British Prime Minister) by benevolent aliens, and now lives in a collection of giant space arks travelling through the galaxy. There’s a whole social thing out there that Powell could have explored, had he been so inclined. He has said he will come back to this world with other books, and that could be with completely different characters. But the arks are not really want this book is about.

The story opens with the crew of a scout vessel being brutally massacred on a world called Candidate-623. When the ship doesn’t return, a mission to find out what happened to it is assembled, and that mission happens to include Captain Eryn King, whose sister was on the lost ship.

Powell obligingly provides us with another interesting spaceship character. This one has the delightful name of Furious Ocelot, which is perfect for a ship that is both small and mighty. He also has, as part of the crew, a rather snarky talking cat, whom he doesn’t make as much use of as I’d hoped. Powell owns cats, and he has their character down pat.

I sped through this one fairly rapidly, and concur wholeheartedly with the general sentiment of the cover blurbs. Here’s a sample of the comments: “propulsive read”, “keeps the pressure on and doesn’t let go”, “gripping and fast-paced”, “drops you into the action from the start and then Just. Keeps. Going.” You get the idea. Powell writes superb page turners. (You are welcome to use that, Gareth.)

I’m still a little less happy with his plots. I think it is still the case that things happen because the plot needs them to, not because it was inevitable from the action that they would turn out this way. But plotting is a skill you can work on, and if you produce books that are as readable as this then you are going to have a long enough career to do that work.