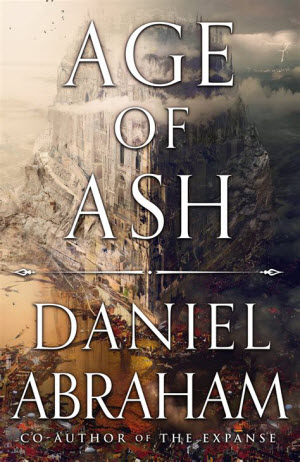 If you were to ask people who their favourite writer of epic fantasy was, the chances are that they would not mention Daniel Abraham. If people know his name at all they probably do so because he is one half of the writing team known as James S A Corey, and therefore is part-responsible for The Expanse, which is a very fine piece of science fiction. However, he is also responsible for The Long Price Quartet, which I fangirled over shamelessly back in Emerald City days, and which I still believe is one of the finest epic fantasies ever produced. I managed to space on the Dagger and Coin series because I was not in a good place for reading long books when it came out, but Abraham is now back with the Kithamar Trilogy, starting with Age of Ash.

Kithamar is an ancient city with its roots in a peace treaty between two warring cultures. The extent to which that history influences the events of the trilogy are not yet clear, but I’m sure there will be much to be revealed in future volumes.

The story mostly involves characters from the district of Longhill. Most of the people who live there are engaged in petty criminality of some sort, because they are desperately poor and have no other option. Our central characters are two young women.

Alys is a smart, competent thief who is determined to make a decent life for herself. Certainly she wants a better future than her alcoholic and occasional sex worker mother. Her elder brother, Darro, is doing well for himself, though he can’t talk much about the jobs he is taking. When Darro is found dead, Alys vows to revenge him, and the best way to do that is to take his place in whatever lucrative scam he had got himself involved in.

Sammish is blessed with the remarkable talent of being utterly unremarkable. No one notices her. This makes her ideal to be the walk-away in a pull. That’s the person who ends up carrying the stolen goods after the mark has been distracted by the flea, and the goods removed by the cutter. If anything goes wrong, those two are much more likely to be suspects, but no one ever suspects Sammish.

As it turns out, Sammish is hopelessly in love with Alys. She wishes that she was clever and ambitious, but she’s just a nobody who is useful only for being a nobody. Alys, of course, doesn’t notice Sammish’s attempts at affection, and takes her entirely for granted.

So we have a central story of unrequited lesbian love, and two young women. One of them is brash and perhaps overconfident. The other utterly lacking in any confidence. There will be character arcs.

Meanwhile all is not well in the richer parts of the city. The Prince of the City, one Bryn a Sal, is dead unexpectedly. His reign has been short and his heir, Elaine, is barely a woman. It is unclear how the former Prince died, but as the story unfolds we learn that there is much secrecy surrounding the royal family. There is a clandestine mystical organisation called the Daris Brotherhood, whose headquarters burned down in mysterious circumstances a few days before Bryn a Sal died. And all this, as we shall find out, is connected to the lucrative work that Darro was engaged in before he died.

One part of a trilogy is, of course, not enough to reveal all of the secrets of Kithamar and its history. It is enough to thoroughly set the scene and, with gorgeous prose, leave the reader eager to find out more. This is excellent fantasy, and I warmly recommend it.