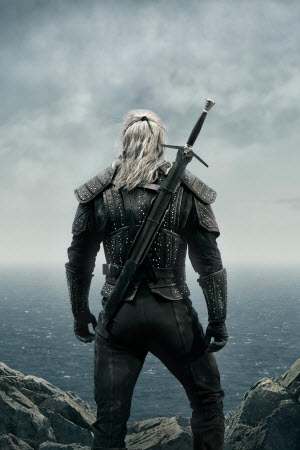 Yes, yes, I know, I am way behind. Too much good TV. But I’m catching up, at least on this one.

I should note at the start that I have only read one Witcher book. I’ve not been moved to read any others. That’s partly because it was a terrible translation. It may also be because I got to meet Andrzej Sapkowski a couple of times at conventions and I wasn’t greatly impressed. It looks like he hasn’t had much to do with the TV series, being listed as a creative consultant for the first episode but merely “inspired by” thereafter. If you are a writer, of course, taking a big pay check and running away fast is the best way to be involved in TV. I know from talking to Neil Gaiman how hard it is to exert creative control.

Anyway, this means that I came to the TV series with very few preconceptions. What I found was something that reminded me a lot of Dungeons & Dragons. The world of The Witcher is one in which dragons, vampires and djinn all exist side-by-side. It is a world full of mediaeval kingdoms in various states of historical development from around the 12th to 16th Centuries. The fashions, at least amongst the wizarding class, are even more varied. More on that later. As is so often the case, the societies portrayed seem to have no sound economic basis for existence, being altogether too full of nobles and soldiers, and not enough full of merchants and peasants.

It is also a world that has a school for wizards, and which was first published long before a certain other series. It is not a new idea. It was in Earthsea, after all, and I doubt that Le Guin made it up entirely by herself. This particular school seems to be a pretty tough place, and turns out some very interesting graduates, most of whom seem rather damaged in some way.

The reaction to the first season when it first aired was very mixed. A lot of this was due to the fact that there are three separate timelines for the three main characters: Geralt the Witcher; Yennefer the sorceress; and Princess Ciri. I spotted what was going on very quickly, but I suspect that people who are not used to this sort of thing in books may have had a lot more trouble.

I should note that the series includes a lot of gratuitously naked women. Television seems to like this sort of thing. Having met Sapkowski, I suspect that this may fairly reflect the books.

Like most people, I ended up very fond of Jaskier the Bard. He might be a bit of an arse, but the series needs someone who doesn’t take Geralt too seriously. Henry Cavill is pleasantly hunky in the lead role, but is rather too craggy and grumpy for my liking as far as men go. He should take more baths.

The most interesting thing about Geralt is that he’s a man created specifically to fight monsters (and I do mean “created” – Witchers are made, not born), and yet he hates killing them. Even the ones that are just beasts he thinks would leave people alone if only people left them alone. Humans, for the most part, are far more evil than the creatures he kills (yes, I do mean you, King Foltest).

Jodhi May as the foul-mouthed, sword-swinging Queen Calanthe is a lot of fun, but doesn’t have much of a major role and ends up dead far too quickly. In any case, I’m rather more fond of Yennefer. Yes, she’s a total basket case of a human being for most of the season, but she’s also the sort of girl who will go on a dragon hunt in a beautiful, fur-trimmed winter coat, and with a large tent that contains a wardrobe, dressing table and king-size bed. I’m assuming that the whole lot fits neatly into a bag of holding and she stuffs it into a pocket in her coat during the day. That is how a mighty sorceress should run her life, I think.

That brings us back to the clothes. The wizards are all very well dressed, and the styles are totally all over the place. Some look mediaeval, some early modern, and some are straight off a Hollywood red carpet. Coat aside, some of Yennefer’s fashion choices are a little suspect. However, Tissaia, the Rectoress of the wizard school, has a particular style that she sticks to throughout. I want all of her outfits. Every single one of them.

Anyway, plot wise the whole thing comes together very nicely in the final episode, and I was surprised to find myself heavily invested in knowing what happens next. You should get a review of season 2 next issue.