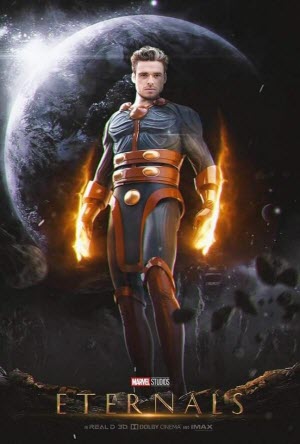 I suspect that it was a surprise to more people than me that the MCU team decided to make use of the Eternals, but they do have a track record of making unusual choices and making them work. This one has got a very mixed reception on Twitter, and I can see why, but I think this new direction for the MCU has promise.

The first thing to note is that I watched Eternals on the same day that the Hunga volcano erupted. Anyone who has watched the movie will know why that made the experience somewhat weird. Having watched many documentaries about Pompeii, I have to say that the sequences in the movie during the eruption were horribly unrealistic, but it is a comic book movie so I guess we should cut it a little slack.

The film also had a bunch of flash-back sequences in ancient Mesopotamia. That too was mostly terrible, though not as terrible as a Ray Harryhausen film. On the other hand, they did make Babylon look beautiful in full colour. The whole city was painted blue and gold to match the Ishtar Gate, which made me very happy.

There were no hanging gardens in Babylon. How many times do I have to remind people?

The representation of Tenochtitlan is even worse, and of course the whole Eternals concept comes from the deeply offensive “brown people couldn’t have invented civilisation on their own” trope from the “Ancient Aliens” crowd. However, the Marvel universe is so chock full of god-like super-power aliens (Asgard, anyone?) that it is hard to avoid putting them in.

But who are the Eternals anyway? They are a group of near-immortal super-powered beings created long ago by god-like creatures called Celestials to guard the universe against evil creatures called Deviants. A group of Eternals was sent to Earth millennia ago and they have given rise to various myths. They were created by Jack Kirby in 1976 when his stock was very high and he could do pretty much what he wanted. Integrating them into the rest of the Marvel universe has been problematic.

To start with, standard Marvel cosmology has it that the gods of both Asgard and Olympus are real people from alien worlds. Bringing in a group of people who are supposedly the truth behind the myths of mankind immediately upsets this. Then there’s the fact that Marvel already had a group of super-powered beings based on Greek goods, the Titans, of whom our old friend Thanos is one. The Titans, who live on Titan, were created by Jim Starlin and Mike Friedrich in 1973, and were later retconned to be a group of Eternals.

I’m assuming that Kevin Feige and his team wanted to try to make sense of this mess. Certainly they have taken a lot of liberties. Ajak, Makkari and Sprite have all been gender-flipped. Kingo is now Indian rather than Japanese. Sersi’s relationship is now with Ikaris rather than Makkari. Phastos is brand new, Black and gay. Only Thena seems relatively untouched. Neil Gaiman had a short run on an Eternals comic in 2006 (a 7-issue mini-series) and some ideas from this appear to have been used in the film, particularly those involving Sprite.

However, possibly the biggest change (and this is something of a spoiler, sorry) is that the Eternals are no longer natural beings. They are androids. This explains why, of all the various species in the galaxy, the Celestials create them to look like humans. Obviously they can be made to look like any type of creatures, and for Earth they were made to look human. It has other implications too, of which more later. And it makes very little sense when you remember that Thanos is an Eternal.

The basic plot of the film is about how the group of Eternals based on Earth discover the truth of their mission and have to decide what to do about it. At the start of the film we are encouraged to see the Eternals as superheroes, but by the end it is clear that they are not. They are soldiers, created and employed by the Celestials to carry out missions. Eternals is a film about colonisation, presented from the point of view of members of the colonising army who come to understand their true purpose.

As such, Eternals differs significantly from other superhero movies. The closest thing to it is Captain America: Civil War, where the Avengers fall out over the Sokovia Accords and start to fight each other. In Eternals the stakes are much higher.

Something else that Eternals tries to do is bring diversity to the MCU. In additional to Black and Indian characters, Sersi is Asian, Makkari is also Black and is played as deaf by a deaf actor. Phastos is gay. Gilgamesh, for some inexplicable reason, is also Asian. Ajak is Latina. Druig is Irish and Ikaris Scottish. Sprite and Thena are the only white American characters on the team.

The problem with this is, as we saw with Sense-8, Hollywood isn’t aways very good at doing representation. The stereotypes tend to bleed through. I don’t’ know what folks in India made of Kingo, who is portrayed as a Bollywood star, complete with a comedy valet whose job it is to film everything he does. Harish Patel is brilliant in the role of Karun the valet, but it did make me uncomfortable.

Eternals tries very hard to do interesting things. It is probably a bit long, and that’s in part due to how much has to get explained. It is also at its weakest when portraying the conflicts between the cast. Angelina Jolie is absolutely brilliant when doing Thena as Goddess of War, but looks a bit lost the rest of the time.

As we have come to expect, the MCU team has done a good job of integrating the film into the MCU project. They’ve also been a bit tongue in cheek at times. It turns out that The Blip and the Infinity War are crucial to the plot, even though none of the Eternals in the story know that Thanos is one of them. Sersi’s human boyfriend asks her if she is a wizard like Doctor Strange. And Phastos’s son thinks that Ikaris is Superman because he can fly and has laser vision.

What we should never forget about MCU material, however, is that it is all part of an unfolding plan. In many ways the most interesting things about Eternals are the things it teases. At the end of the film the team splits up. One group remains on Earth, while the others head off to look for more of their kind.

Remember that Thanos (or more properly Thanatos if you are stickler for correct Greek) is an Eternal? Well obviously he has a brother called Eros. Who, it turns out, is played by Harry Styles. This should be a lot of fun. (And hopefully Styles will bring some of his own gender and sexuality to the role.)

Also, remember that I mentioned that Sersi has a human boyfriend? Well, he’s played by Kit Harrington, and that should immediately give you a clue that he has a bigger role ahead of him. His name is Dane Whitman. If you have spent any time reading Marvel comics then you will know exactly who he is and, like me, you will be Very Excited to see him again. Flying horse and all.

What I don’t think the Eternals need is to be put in a massive, 3-cornered super team fight along with the Avengers and X-Men. But Marvel has managed to make ridiculous ideas work before so maybe Judgement Day won’t be quite that bad.

Oh, one more thing. Characters die in this film. It may look like some of them are Really, Most Sincerely Dead. However, remember that the Eternals are androids made by the Celestials. They can easily make copies. Which is just as well, because one of those who dies is way too good to waste.