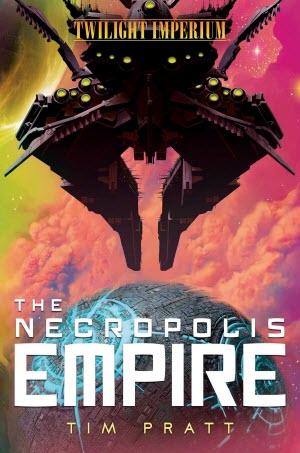 It is, I suspect, a fairly rare thing to find that you have read the middle book of a trilogy and had no idea that there was a preceding volume. Then again, Tim Pratt keeps surprising me.

The Necropolis Empire is the second book in his Twilight Imperium series. It being an Aconyte book, it is a product tie-in, in this case with the successful space opera strategy boardgame, also called Twilight Imperium. I know nothing about the game save what I can Google, and knew zero about it when I read the book. That did not affect my reading.

The main reason that I didn’t twig that this was a book 2 is that almost all the characters are new. In particular, the focus of the story is on Bianca Xing whom Pratt uses to take pot shots at the classic Chosen One narrative.

Bianca is, as far as she knows, the child of a poor, farming family on a backwater planet called Darit that was once part of a galactic empire but has long since lost contact with spacefaring civilisation. However, she is incredibly smart, and has always had the feeling that she was meant for something greater.

Then the aliens arrive on Darit, welcome Bianca and her people back under their protective wing and introduce them to the strange foreign notion of “taxes”. They also take an interest in Bianca. It turns out that she is actually a lost princess.

Given that the aliens in question are the gloomy, duty-obsessed, Barony of Letnev, on whose home planet people live entirely underground in sterilised burrows, and whose ship is called the Grim Countenance, it seems likely that plucky young Bianca is not one of them. But if she isn’t, what do they want her for? And what does this have to do with the mad archaeologist who is pretending to be their ship’s doctor so that she can examine Bianca?

Meanwhile the second branch of the narrative introduces us to Heuvelt Angriff, a young man of wealthy parentage whose sole ambition is to grow up to be Indiana Jones (or whoever the equivalent is in the movies of the Twilight Imperium world). Sadly for him, Heuvelt is very bad at being an adventurer, and even worse with money. He is keeping himself and his ship afloat, and half a step ahead of his creditors, mainly thanks to the competency of his alien crewmates and having a side-line in smuggling.

Naturally we can expect these two storylines to interest at some point, and it isn’t giving much away to suggest that this might involve a Temple of Doom of some sort, and the true secret of Bianca’s ancestry.

All this is fine and good, but the thing that makes the book spark is the main carry-over character from book 1, The Fractured Void. She is Severyne Dampierre, the highly competent captain of the Grim Countenance. Unique among the Letnev, she appears to be possessed of imagination, initiative and even traces of a sense of humour. Book 1 is mainly about her and I now very much want to read it. She is the villain of The Necropolis Empire, but something tells me that she and Bianca will end up working together in book 3 because she is far too good a character to waste.

Like most of Pratt’s novels, I don’t expect this book to win any awards. He seems to save that for his short fiction. But it is a fun and easy read, and we surely need plenty of those these days.