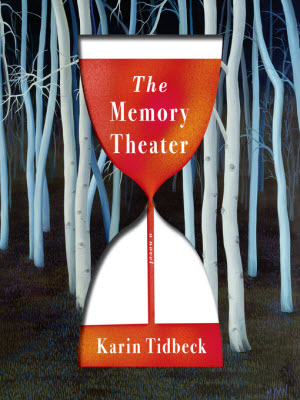 Karen Tidbeck novels are not ordinary things. They ooze strangeness; they twist and morph just when you thought you had a handle on the plot; they disappear off in directions that you didn’t know could exist. The Memory Theater is no exception.

The book takes place in the world of The Gardens, the mysterious, timeless fantasy of a world that we first saw through the stories “August Prima” and “Aunts” in the collection, Jagganath. The Gardens are ruled over by the Lady Mnemosyne who is named after the Greek goddess of memory. But that’s a joke, because there is no memory in The Gardens. There is no time either. The Lords and Ladies who inhabit that tiny bubble world never remember, never grow old, but wake up each morning fresh to face a new, perfectly boring and unchanging day. Boring, unless they find something new to do, which they will probably have forgotten by the next day.

We know the Gardens are connected to other worlds, because occasionally children find their way there, as in in a fairy tale. And as in a fairy tale, they are enslaved by the ageless monsters of that unearthly realm. Someone has to provide the sport, after all.

Lord Walpurgis once had an idea. He thought it would be nice to have a child of his own. He did a deal with a traveller called Ghorbi to make him a daughter. But the Lords and Ladies of The Gardens have the attention spans of mayflies and soon Dora found herself abandoned. Not being human, she could not be enslaved like the lost children, but she could do little to help them. She made a special friend of Thistle, the page to Lady Augusta, and together they plotted escape.

Ah, Augusta, what a character she is. Many characters in fantasy novels are Evil, but they generally have mad ambition too. Augusta is vain, selfish, lazy, and limitlessly cruel, but has no ambition beyond being constantly indulged. She is such an awful person that she could probably be elected leader of the Conservative Party if she could be bothered to make the effort. But she wouldn’t. She would just demand that they bow down to her and assume that she would be obeyed.

Of course, Dora and Thistle do escape. There would not be much of a plot if they didn’t. Each day in The Gardens is much the same as the next, so for there to be a story they must leave. Along the way they encounter a troop of travelling players who live in a large, wheeled house. Their company is called The Memory Theater, hence the title of the book. They preserve stories from the worlds that they have visited. They are, if you like, a travelling book of fairy tales.

Augusta also travels. She ends up in rural Sweden during World War Two. It is a cold and dreary place, and people do not treat her with the customary respect and obeisance. This does not go down well.

And there you have a story in search of a conclusion. It will get there by ways that you did not expect, via strange byways that you may never find again.

Gary Wolfe has likened Tidbeck’s fiction to Heinrich Kley’s paintings. Tidbeck has apparently referenced John Bauer. I prefer to think that Tidbeck writes her books by shuffling a collection of paintings by Leonora Carrington and then makes up the way in which they are connected.

If you walk far enough in the ways between worlds then perhaps all of these things are true. Regardless, Tidbeck is one of the finest writers of surreal fantasy about. They deserve more recognition. Somewhere, I am sure, they are a legend, and The Memory Theater has a play about them.