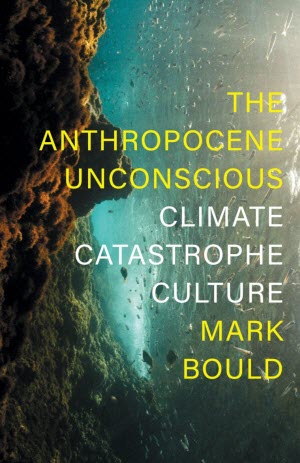 Academic writing, particularly in literary criticism, has a tendency to be meticulously argued, strewn with references to established Theory and Authority, and to use jargon in the manner of Athena’s shield. Anyone gazing upon it is so stupefied with confusion and boredom that they are incapable of responding.

Not so, The Anthropocene Unconscious by Mark Bould. This book is short, snappy, very snarky, and for the most part an entertaining read. It is also what academics call a “provocation”.

It all goes back to 2016 when Amitav Ghosh published a book titled The Great Derangement: Climate Change and the Unthinkable. In it, Ghosh argues that modern literature had singularly failed to confront the issue of climate change. By “literature” he of course means that subset of fiction that pointedly excludes science fiction and fantasy, because we’ve been writing about climate change at least since George Turner’s classic The Sea and Summer (1989), and probably a lot longer. Bould is not interested in that argument. Rather he advances the idea that, subconsciously, all of modern literature (by which he means not only all fiction, but also all comics, TV and movies) is about climate change.

That might strike you as a rather extreme claim, which is why I have described this book as a “provocation”. I don’t think Bould expects there to be no counter examples. Somewhere in the world there is doubtless someone who has produced literature that doesn’t share this underlying obsession. The point is that fears of climate change affect us all, and creep into far more of our fiction than we might like to admit.

Before Bould can make this argument, he first has to deal with the dreary literalism and obsession with authorial intent exhibited by (former?) philosophers of literature such as K*thleen St*ck. Bould wastes very little time on this because, unlike philosophers, literary critics are largely agreed that authorial intent is a pointless dead end. He comments:

But critics are not bathyspheric explorers plumbing textual depths. At no point do we even need to break the surface. The clamour of the unspoken is everywhere. Thus, it is beyond quixotic to imagine that criticism is concerned with uncovering the text’s single true meaning. Because there is no such thing. There is no rabbit waiting to be pulled out of the hat. There is probably not even a hat.

From here Bould sets of on a fantastic journey though fiction, ranging from zombie movies and the Sharknado series to Ducks, Newburyport and Mansfield Park, on to Ghosh’s own fiction, sweeping through the Fast & Furious franchise, and idling a while with a number of arthouse movies that a lightweight like me has never heard of. Bould is primarily film critic and I bow to his expertise.

I should note that Bould is the sort of person who is not afraid to quote Karl Marx in his writing. This does not lead to stodgy, revolutionary prose. Rather it produces snarky, pithy little asides like this:

Like capitalism, the novel depends on producing – and by definition not counting – externalities.

Below, a pitch-black sea undulates; above, the sky, which should be full of stars, is deep reddish brown, filthy with light pollution. In between, a fairytale Manhattan, a skyline of yellow light, garish and unsavoury, burns against the night. It looks just like Blade Runner’s Los Angeles, Ridley Scott’s science-fictionalised recollection of the Port Talbot steelworks.

Which will probably mean nothing to you if you have not driven past Port Talbot on the M4 on your way to Swansea, Llanelli and points further west, but will strike an instant chord if you have.

The purpose of these quotes is to show you that The Anthropocene Unconscious is a book as much in love with language as it is in love with the subjects of its inquiry. It is, in short, a joy to read, which is all too rare in academic literature. You might find some of the material about obscure films a little dull simply because you haven’t seen any of the works that Bould is writing about, but other than that I wholeheartedly recommend it.