Beyond the Hallowed Sky 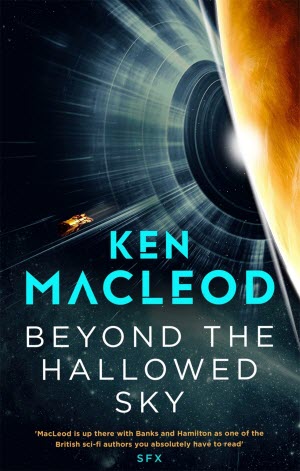 As most of you will know, there is a bid to bring Worldcon back to Glasgow in 2024. What better way to promote that, than have one of Scotland’s finest writers of science fiction launch a new trilogy that is centred on the building of a faster-than-light craft in a Clyde shipyard? This version of Spaceport Glasgow might not be as chrome-covered and busy as the painting that Jim Burns produced for us in 2005, but it is even more evocative of the setting.

This, then, is the new novel by Ken MacLeod: volume one in the Lightspeed Trilogy, which will presumably be completed by the time that we all assemble at the SECC, assuming that there is a Worldcon left by then. I look pointedly at friends in Chicago and Chengdu, and hope they will take better care of what has been entrusted to them than Washington did.

Before diving into the plot, we need to spend a bit of time on the near future that MacLeod has constructed for us in Beyond the Hallowed Sky. The year is 2070. Much has changed, but much stays the same. Climate change has been mostly brought under control; democracy has been restored to the USA; and the world is run mostly by three large power blocks. These are the Anglophone Alliance, which does not include Ireland and Scotland, but does include India; the European Union, whence Ireland and Scotland have fled; and the Co-ordinated States, which is an uneasy alliance of Russia, China and their dependents.

You will note that Africa and Latin America are not included in these groups, so little has changed there. Also MacLeod has assumed that Wales will go along meekly with whatever England wants, so I’m afraid that we’ll have to keep beating the Scots at rugby until their manners improve. A classic MacLeod twist is that the EU has undergone a Socialist revolution and is now some sort of technocratic single party state which is better than the Fascist Alliance and the Totalitarian Co-ord because the revolutionary cadres are so secret from each other that no one really has any control, allegedly.

Of particular significance is that the Union, as MacLeod calls it, is run by an Anticipatory Algorithmic Artificial Intelligence called Iskander. The other two power blocks have their AIs too. The Alliance has Smart Alec, presumably a descendant of Alexa; and the Co-ord has WeThink, developed by the Chinese. Iskander, however, is smarter than both of these, and is uncannily good at predicting that citizens need. Here he is helping out our hero with a small domestic problem.

He peered at the selection of Celtic and Romano-British reproductions, trying to recall what style of brooch Ellen usually wore or indeed if she ever did. ‘Uh, Iskander, what would Ellen like of this lot that she doesn’t already have?’

By the way, one reason why this scene is set in a gift shop of a museum of ancient British culture is because the tomb of a Romano-British king has been found inside the mountain called Ben Arthur which is a mere hour’s drive from Glasgow. That’s another tourist destination for Worldcon-goers to take in, and another reason for me to give MacLeod a good talking to next time I see him.

So, what is the dramatis personae for this tale? First up we have Lakshmi Nayak, a mathematical genius who comes up with what seems to her to be a set of equations that would actually permit faster than light travel. Well, she doesn’t actually invent it. It is sent to her in a letter, in her own handwriting, from Kabul, where she has never been. Which suggests that at some point she travelled back in time to send it to herself. Which proves that FTL is possible. QED.

Warned off her researches by the English Secret Service, Nayak defects to the Union and Iskander finds her a job near Glasgow where she will be well placed to one day make the acquaintance of John Galt Grant, a marine engineer specialising in submarines, and a veteran of the Rising, the Union’s Socialist revolution. Grant isn’t Party himself, but there are Party members in the trade union hierarchy at the shipyard where he works.

Unbeknownst to either of them, the Alliance and Co-ord have had FTL for decades. It is a Deep State secret for both of them, and they have established a base on a nearby inhabitable planet they have named Apis. It has that name because, although most of the wildlife is forms of giant arthropod, the planet is also home to bees. Absolutely identical down to the last strand of DNA Earth bees.

One of the reasons why there is a planet inhabited with bees is a pun of such awful magnitude that I feel I owe MacLeod several glasses of fine whisky for having the audacity to perpetrate it.

On Apis we make the acquaintance of Emma Hazeldene, a biologist studying the bees. Shortly after we meet her, she is involved in deadly peril, because there are other things on Apis and they bear no relation to Earth life at all.

The final piece of the puzzle is James Bond Marcus Owen, a robot in the service of the English Secret Service. Being a robot, Owen is more than capable of outlandish feats of derring do, and there are parts of the book that are very clearly lifted from MacLeod’s script for the Bond movie based on his book.

Meanwhile there is a fine science fiction plot cooking away in the background, and eventually our heroes will have to put their newly built FTL ship to use. How that happens, I will leave you to find out for yourselves. It is a very enjoyable journey, and I for one can’t wait for the next book in the series.