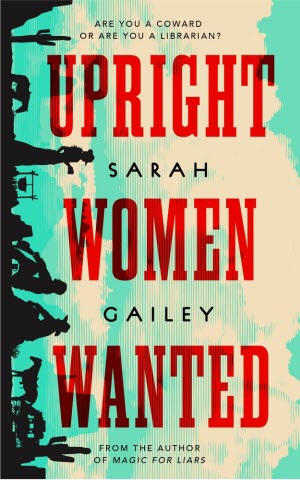 Finishing up my Hugo reading required taking a look at this fine novella from Sarah Gailey. It deserves its place in a very strong field.

The basic setting of Upright Women Wanted is a post-apocalyptic America that has reverted to a sort of Wild West Gilead. People live in small towns very reminiscent of cowboy movies, but there is the sort of emphasis on religion that you’d expect from the Puritans of New England, and somewhere far away there is a government that still has sophisticated technology such as cars, and is waging endless war on Eastasia or some other such allegedly villainous part of the world.

Our heroine, Esther, is a young lesbian who has just seen her girlfriend hanged for possession of Unauthorised Materials. Desperate to cure herself of her Unnatural Impulses, Esther flees to the most Upright and Morally Abiding people that she knows of; the travelling Librarians whose job it is to go from town to town, distributing government propaganda and any other such Improving Materials as might benefit the townsfolk.

However, the Librarians are not what they seem. Lyda and Bet seem suspiciously close. Their apprentice, Cye, insists on using they/them pronouns when they are away from town. And the job of a travelling purveyor of written materials can be turned to purposes other those that the government intended.

Galiey, having previously done the gay wild west thing with American Hippo, is very much at home in this setting. There’s a story arc for Esther, and a fair amount of fun with gunfights against stupid men along the way. We also get to meet Amity, who is perhaps what James Bond would be like if he was black and female: competent, flirtatious, ruthless, and single-mindedly focused on the mission in hand.

There’s nothing particularly unexpected in the story. There are hints dropped that Bet is a trans woman, but it isn’t overt, and anyway the story isn’t about that. Having librarians as heroes will endear the book to many women readers. What’s more, the book will irritate the heck out of the “no gays ‘n’ wimmin in my SF” crowd, and that’s a very fine thing.