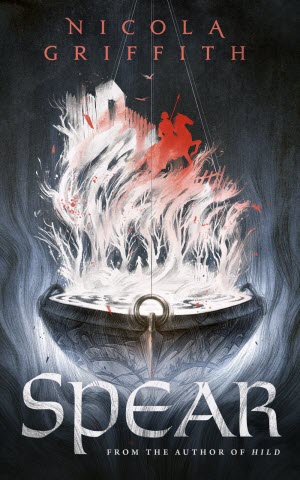 One of the ways in which you can tell that a writer is supremely talented is if they can turn their hand to any genre and excel at it. Nicola Griffith made her name in science fiction, with award winning books such as Ammonite and Slow River. Then she switched to crime for the splendid Aud Torvingen series. She’s written a memoir, And Now We Are Going to Have a Party, which won a Lammy. Her foray into historical fiction, Hild, has been a huge hit. And now she’s shown that she’s equally talented with fantasy. She has already won the World Fantasy Award for co-editing the anthology, Bending the Landscape (with Stephen Pagel). Spear, however, is fiction. To be precise, it is Arthuriana.

All Arthuriana is fanfic, of course. The original is lost in the mists of time, and most modern works are based heavily on mediaeval fanfic (Geoffrey of Monmouth & Crétien de Troyes, Thomas Malory). Occasionally someone goes back to the Mabinogion, or tries to reconstruct what they think the original Celtic legends were. I suspect that in Brittany they have their own Arthuriana that looks nothing like ours. Griffith, being Griffith, has looked at all of it and done her own thing. So let’s take a look at how she has put the pieces together.

Historically speaking, Spear is set in early Mediaeval Wales. Arthur rules over a small kingdom in the south of the country, and dreams of restoring the glory days when legions of red-crested soldiers were based at Caer Leon and could easily beat back the hordes of invaders who have overrun what will soon become known as the land of the Eingel. Further west, the land is plagued by bandits, and Arthur’s knights spend as much time keeping them in check as they do protecting their eastern border.

In the hills towards the head of the Ystrad Twyi (that’s the valley of the river Twyi to you anglophones) there is a cave. It is home to two women. The older is the mother of the younger. She’s aging, and not entirely in her right mind. She’s also a witch. The younger has run in the woods all of her life. She dreams of becoming famed for her skill at arms, and winning the hearts of beautiful maids. And one day, through the valley, come men in armour on horseback.

Mythologically Spear is a re-telling of the legend of Percival, who according to Crétien de Troyes was raised by his mother in the wilds of Wales. It also owes a lot or Irish legend, and if you are now thinking that there is a Spear alongside the Grail and Excalibur then I have already said too much.

From an Arthurian point of view, the book skips over the whole sword in the stone thing (oh, there’s a stone too!) and starts with Arthur already king and Lancelot already at court. Myrddyn is missing, and Nimuë, the Lady of the Lake, has taken his place as Arthur’s chief advisor. Naturally all of this will be very significant.

Geographically the Afon Twyi flows south-west through Carmarthenshire, meeting the sea at Abertawe (Swansea). Carmarthen is Caer Myrddyn, and one possible etymology links the town to the legendary wizard. The town itself is Roman, the western-most outpost of the Empire, but there is a hill fort just to the east on a place called Merlin’s Hill.

Personally I know the area a little. Jo Hall and Roz Clarke now live in Rhydaman (Ammanford) one river east from the Ystrad Twyi. Also Griffith kindly asked my advice on some of the Welsh words she was using. Obviously I am biased towards the book.

I think that covers everything except the story itself. This being Griffith, the prose is magnificent. I think you can trust me on that. As for the story, I am in awe of how Griffith managed to take the whole Arthur-Guinevere-Lancelot story, the whole Merlin-Nimuë story, and the Grail quest, and wrap the whole thing up in the space of a novella. And all without a single mention of Hank Pym or the Quantum Realm. It is sorcery, it must be.

Are you convinced yet? Do I need to mention that the book has some fabulous Rovina Cai art?

Frankly, the only thing wrong with Spear is that you won’t be able to get a copy until April. For that I am truly sorry.