Far From the Light of Heaven 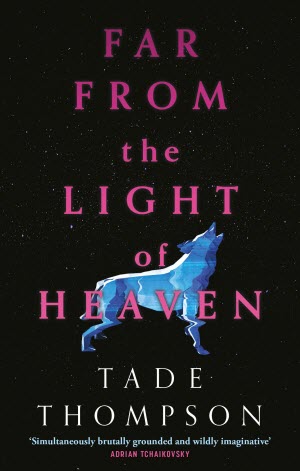 When you have a very busy life, and plenty of available distractions, but still want to get lots of reading one each month, it is blessing to find a book that you tear through in a couple of days. Such a book is the latest offering from Tade Thompson, and for that I am duly grateful. It is always good to find a science fiction book that keeps you reading because you want to find out what the hell is going on.

At root, Far From the Light of Heaven is a locked room mystery novel. A colony ship, the Ragtime, with passengers in not-quite-cryosleep, arrives at its destination. The human pilot wakes up and finds that several passengers have been murdered during the voyage. That should be impossible. Everyone on board has been asleep. But ten years is a long time. Who knows what might have happened during the flight?

Of course, when someone like Tade writes this sort of book, there are things you should expect. He’s a psychiatrist by profession. The way in which humans behave in space is of professional interest to him. He’s also not the sort of guy to have a good-and-evil solution to a murder mystery novel. Hence there is some fairly sophisticated treatment of the characters, and a book that will go on for some time after we discover who the killer is, and just as importantly who the intended victim is. So far so good.

There’s more to the book that that, though. Ostensibly our her is Michelle Campion, super-competent daughter of a famous space-faring family who is commanding her first mission. But there are several other viewpoint characters. One of the most interesting is Rasheed Fin, the investigator sent up by the colony world to find out what happened on the Ragtime. He’s a man with a redemption arc to work out.

Fin’s main job on his home world is as a Repatriator. That is, he is tasked with finding misbehaving aliens who have wormed their way into the human population of Bloodroot and fucked shit up in the weird way that only they can. The aliens, the Lambers, are the most off-the-wall aspect of the book. I suspect that some hard-SF dudebros will be deeply offended by them, but there’s a lot of promise there too.

So there’s a lot in the book. Possibly too much. The whole Node E thing (you’ll know it when you get there), for example, seems like a thin excuse for adding drama. Given that it exists, it should have been Campion’s primary suspect for where the murderer is hiding. As it is, we only find out about it half-way through the book.

There are a few other things like that in the book, and had I been the editor I would have wanted to raise red flags over them. The plot isn’t as tight as the pacing. However, that doesn’t stop Far From the Light of Heaven being a hugely enjoyable novel. It is just one that seems to have been a little rushed in places. If you prefer your fiction morally simple and straightforward you probably won’t like it much, but we try to do better than that these days, don’t we?