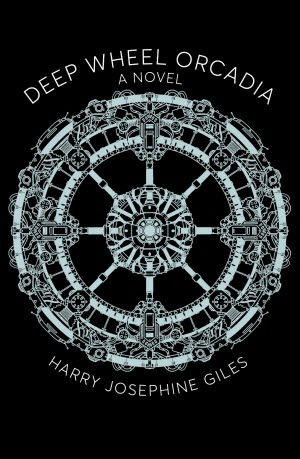 Last issue I reviewed a novel by the highly respected Japanese-American trans woman poet, Ryka Aoki. This issue it is time to come back across the Atlantic to meet another excellent trans poet, Scotland’s Harry Josephine Giles.

Actually I’m not sure if “Scotland” is the right geographic term here. Giles does currently live in Scotland, but they hail from Orkney, which is an entirely different kettle of herring. Its flag very clearly references those of other Nordic countries. Its people have their own dialect, distinct from Scots. And Deep Wheel Orcadia is written in that language.

Don’t panic, folks. There is an English translation of the text alongside the Orcadian. More on that later. First, we need to look at the story.

As you might have guessed, the Orcadia of the book is a space station. It is in orbit around a gas giant planet, and many of the people who live there spend much of their time fishing for something called Lights. Like the Earthly region from which it takes its name, Orcadia is an island nation.

If you have spent any length of time on islands, which I have, then the culture is instantly recognisable. Scilly might be at the other end of the country from Orkney, but I can see many of the concerns of islanders there reflected in the people or Orcadia. The same is true of Skye in Ken MacLeod’s Selkie Summer. Islands are small communities and are often quite conservative (with a small c) as a result. Some people take to them naturally. Others chafe at the lack of opportunity. Some revel in the isolation, others abhor it.

The book has two primary characters. Astrid is Orcadian. She has been to art school on Mars and has come home looking for inspiration in her native surroundings. Darling is fleeing a stultified life of a different sort. Her wealthy family had a life all planned out for her, but she wanted something very different from it. As we watch the two of them come together as lovers, and their very different backgrounds collide, we also see life from the view of those Orcadians who have never left.

The Light harvest is failing. Catches have become smaller and smaller each year. No one knows why. Orcadia has no other significant source of income. Worse, meddling outsiders are suggesting that the Lights might actually be intelligent, and that hunting them should be banned. Meanwhile a xeno-archaeologist called Noor is investigating the strange phenomena knows as “wrecks” – ghost-like abandoned spacecraft that appear and disappear at random.

If you are expecting a neat and tidy conclusion to the book, then you will be disappointed. The story is about characters, not plot. This is a book that will appeal more to fans of M John Harrison than, say, Mary Robinette Kowal. You have been warned. But you still may want to read Deep Wheel Orcadia to marvel at what it does with translation.

To start with, Orcadian is not wholly inscrutable to English speakers. Unlike Iain Banks’s Feersum Endjinn, written in Scots, which you can actually read without a translation, Deep Wheel Orcadia does contain a number of words that are not English sound-alikes. Some of them have Nordic origins. For example the Orcadian word for a Council is Ting, reminiscent of the Althing, the Icelandic parliament.

So Giles provides a translation. But they don’t do the usual thing of finding a selection of English words that more or less convey the meaning of the original, or at least provide pleasing English prose. Instead they represent the more complex Orcadian words by mashed-together selections of English words that, each individually, would lose some element of meaning, but together represent the entire word to be translated.

If that sounds, confusing, try an example. Here’s the original Orcadian. Astrid has received what amounts to an email message from a college friend back on Mars.

The cast sheu gits by slow packet is pangit
wi sarcasm. Whit like is sheu noo i’the inner
wyrlds? Is sheu been reprogrammed yet
by the spacers? Deus sheu mynd whit like is the taste
o a gress-fed staek? Whit like is the yird o Mars?

And here is the translation.

The message she receives by slow packet is fullbursting with sarcasm. How is she doing now in the inner wilds? Has she been reprogrammed yet by the spacers? Does she rememberknowreflectwill how a grass-fed steak tastes? How Mars’s groundworldsoil feels?

As you’ll see, some of the words need no translation. Some are easy to work out. But words like pangit, mynd and yird have no direct analogue in English and are rendered in a more rich and complex way.

I’ll be fascinated to see what professional translators make of this technique. I’m not sure it would work as well with translation from a language such as Chinese which is far more removed from English, but here I think it adds a lot to the meaning.

By the way, did you notice that the passage in Orcadian is in poetry. All of it is like that. Deep Wheel Orcadia is an epic poem. Which is yet another hugely impressive thing about it.

Trans people are producing some of the best SF&F around these days.