The Past is Red 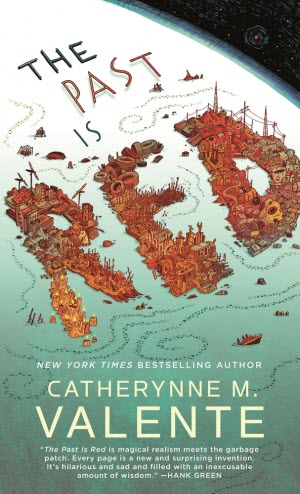 Tetley Abednego has to be one of the most fascinating characters in the history of science fiction. Those of you familiar with the Sturgeon Award winning story, “The Future is Blue”, will already be aware of this. For those who don’t have that story, don’t worry, it is included as a prequel with The Past is Red.

Tetley’s future is blue because climate change has happened. The whole of Earth is under water. A few small groups of humans still survive on boats, or on Brighton Pier which has somehow been made seaworthy, but there is only one large settlement on the planet. Tetley lives in Garbagetown, an upgraded version of the Great Pacific Garbage Patch which has been stitched together to form a floating island on which people can live. There are fish, and there is rain, so they can survive. Everything else they have to scavenge from the garbage that the Fuckwits threw away.

The Fuckwits are, of course, us: the people who had everything, and who ruined it for ourselves, and for all our descendants, by destroying the planetary ecosystem. Tetley and her neighbours will occasionally get glimpses of what life was like in the past, if they get hold of a functioning video player, but for the most part all they have is mountains of unwanted junk.

“The Future is Blue” tells the story of how Tetley grew up, how she fell in love with a boy called Goodnight Moon, and how she came to commit a Great and Terrible Crime which made her the most despised person in Garbagetown. The Past is Red is set many years in the future. Tetley tells us about how her life is different now, how she has a mysterious friend called Big Red Mars, and how she was once married to King Xanax of Pill Hill.

I should note, by the way, that I love the way Cat Valente has named the various parts of Garbagetown according to the types of garbage stored there. As well as Pill Hill we have Electricity City, Candle Hole, Periodically Circus and my favourite, Winditch, which contains thrown away trophies for everything from sports competitions to kids with the best smile to Gretchen Barnes who, according to her rather modest trophy, was the World’s Best Wife.

The thing about Tetley, the aspect of her personality that makes her unique among the people of Garbagetown, is that she has hope. She is living in what we might see as the worst of all possible worlds. Literally, she lives on a garbage heap, because it is the only place left to live. But to Tetley it is the best of all possible worlds, because it is the only world that she has. Alone amongst her people, Tetley understands that the only way forward is into the future. The past is gone, and nothing they do in their lifetimes, or of those of hundreds of generations after them, can ever bring it back.

Tetley, then, is a beacon of hope in a world that has none. And Valente, very cleverly, makes it clear to us readers, that there really is no hope. Humanity is doomed. Yet Tetley refuses to accept this. She has fish. She has her friends, the seals and the gannets. She takes joy where she can, because to do otherwise is to submit to despair.

The Past is Red is a story about how to live in a world that is well and truly fucked. It is, perhaps, a story for our times.