The Ministry for the Future 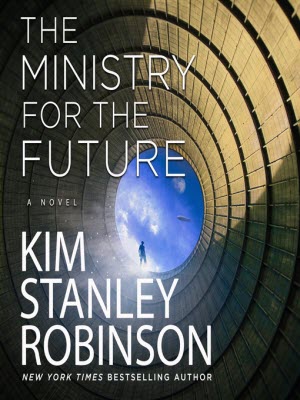 COP26 will be held in Glasgow in November. That it is being hosted by a UK government whose attitude towards climate change is almost entirely performative, and only not so when there is an opportunity for grift on the part of ministers, will doubtless overshadow proceedings to a large extent. But one of the invited speakers at the event will be someone who is very much concerned with saving the planet.

Prior to his arrival in Glasgow, Kim Stanley Robinson has done a couple of online events for UK organisations. One was co-hosted by the Centre for Fantasy and the Fantastic at the University of Glasgow. The other was part of the Festival of the Future City hosted by Bristol Ideas. The latter has an introduction by me, and is available to view on YouTube (see below for embedded video).

Robinson’s The Ministry for the Future begins, chronologically, at the COP29 meeting in Bogotá, Colombia, at which the eponymous ministry is created. The diplomats who created it doubtless saw it as another impressive-sounding delaying tactic. But shortly after COP29 we come to the events of the first chapter of the book. A great heatwave strikes India. It is so hot that human beings cook to death. Twenty million people die.

Of course that is a fine, dramatic, opening, but Robinson appears to believe that only something that dramatic could get sufficient people concerned about climate change for effective attempts to combat it to happen. He’s probably right. Here he is explaining where we are right now.

But early in the twenty-first century it became clear that the planet was incapable of sustaining everyone at Western levels, and at that point the richest pulled away into their fortress mansions, bought the governments or disabled them from action against them, and bolted down their doors to wait it out until some poorly theorized better time, which really came down to just the remainder of their lives, and perhaps the lives of their children if they were feeling optimistic—beyond that, après moi le deluge.

There’s another, more worrying side to it as well:

The Götterdämmerung Syndrome, as with most violent pathologies, is more often seen in men than women. It is often interpreted as an example of narcissistic rage. Those who feel it are usually privileged and entitled, and they become extremely angry when their privileges and sense of entitlement are being taken away. If then their choice gets reduced to admitting they are in error or destroying the world, a reduction they often feel to be the case, the obvious choice for them is to destroy the world; for they cannot admit they have ever erred.

I suspect that this might also explain why supposedly feminist white women are happy to embrace fascism rather than admit that the greatest threat to their safety is from cisgender men, not from women like me.

Still, the point of The Ministry for the Future is not to wallow in doom and gloom, but rather to suggest ways in which the planet might be saved. Robinson, being a relentless optimist, has ideas. Indeed, he has quite a mixed bag of them. There’s geoengineering in the form of pumping water from beneath Antarctic glaciers. There’s economics in the form of a Carbon Coin that allows people to earn money for sequestering carbon. There’s politics in the form of a new, community-owned social media network that wrests control of the global narrative away from self-interested tech billionaires. And there’s terrorism.

That latter point needs some elaboration. The Indian heat wave disaster gives rise to an organisation known as the Children of Kali. They commit a number of highly effective atrocities aimed specifically against things such as private air travel, and against anyone who profits from the fossil fuel industry. Nothing in the book specifically connects the Ministry with this organisation, and like most terrorist groups the Children have a very amorphous structure. However, early on in the book, the Chief of Staff at the Ministry, Badim Bahadur, suggests setting up a “black ops” team whose activities could be easily denied. We are never told what it is that they do.

There is another event that the Ministry is accused of engineering, and it gives rise to the most amusing sections of the book. A group of climate activists kidnaps the attendees at Davos and subjects them to “consciousness raising” education. It is very much middle class violence. Most of the wealthy victims treat the whole thing as a jolly jape.

Whether you think that Robinson’s proposed solutions will work or not is a matter of opinion. Indeed, one of the reasons why he has proposed a basket of solutions is that some of the things he suggests might not work. The point is not that we must take certain actions, but that we must do some things, lots of things, until we find something that works. Because doing nothing is guaranteed to lead to disaster.

However, before we can do anything, we have to care, we have to stop discounting the future. Here Robinson is spot on. When governments and corporations do cost-benefit analysis, they much prefer a small benefit soon to a possible larger benefit later. The stock market, which is now driven by inhumanly fast trading conducted by computer algorithms, can’t even manage to look at next month, let alone next year. These days, the idea that the future matters is revolutionary. Which is why this book matters.

Something else that is revolutionary is the structure of the book. It is composed of 106 very short chapters. Many of them are told from the point of view of characters who are not named, and who never again feature in the narrative. Some are short riddles. One is simply a list of representatives of different countries saying what they are doing to combat climate change. It is a very non-traditional approach to fiction. I don’t object to such experimentation, but I did find it hard to get into the book because there wasn’t much to carry you through.

Incidentally, looking at that list of countries, Robinson appears to believe that by 2038 the British Isles will be divided into three countries: Ireland, Scotland and England. Must have a word with him about that.

Robinson does try to provide a narrative thread to the book. This comes in the form of the developing relationship between the head of the Ministry, Mary Murphy, and Frank May, the sole survivor of the Indian Heat Wave. Frank has massive PTSD and in part acts a moral compass for Mary, while at the same time doing some pretty awful things.

I’m by no means surprised that The Ministry for the Future has caught the popular imagination, despite its difficult and unusual structure. We are living in Interesting Times, and such times demand unconventional thinking. Robinson’s ideas may not work, but his optimism is the only hope we have. As I said to the audience in Bristol, few other science fiction writers have spent so much time thinking about the problems the world faces in the near future, and trying to find practical ways to overcome them. For that alone, Robinson deserves our praise.