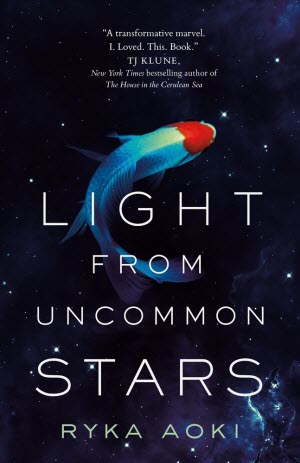 The first thing to say about the debut SF&F novel from acclaimed poet, Ryka Aoki, is that if you were to pitch the idea in just about any writing class you would be shot down in no uncertain terms. This is not just a book that accepted wisdom would say cannot sell, it is one you’d be told quite categorically cannot work. And yet…

Look, see what you think.

Katrina Nguyen is a trans girl from Oakland who has run away from an abusive home and is now in LA with nothing but some clothes and makeup, a few weeks supply of hormones, and her beloved violin.

Shizuka Satomi is a legendary violin teacher who has sold her soul to the Devil. In order to earn it back, she has to provide the souls of seven ambitious and extremely talented students. Six have been delivered. She just needs one more to save herself.

Lucy Matía owns a violin repair shop in LA. The Matía family was once lauded as amongst the greatest violin makers in the world. But, as her father and grandfather kept telling her, the job of a master craftsman is not suited to a mere woman, so Lucy must make do under the crushing weight of massive imposter syndrome.

Lan Tran is a space alien fleeing a galactic war. She has taken her ship and family to a backwater planet that has no stargate where they hope to hide out for a while. They are currently running a donut shop in LA. They don’t know much about donuts, but they have replicators.

Wait, what? It was almost making sense there, and then Aoki threw in a bunch of refugees from Galaxy Quest.

Trust me though, it all works. To start with, Aoki needs someone with a bit of power to balance out the demon, Tremon Philippe, who is determined to collect his seventh soul, be it Katrina’s or Shizuka’s. She clearly doesn’t want to go all good-v-evil on us, so she does science-v-magic instead.

Second, what’s a popular SF&F book these days without a lesbian romance?

And perhaps most importantly, there’s the question of making donuts with Star Trek replicators. Which just happens to be part of the central theme of the novel.

It should work. The replicators were programmed using the donuts made by the people from whom Lan and her family bought the shop. The ones they make are perfect copies. And yet, slowly but surely, the customers are drifting away. Human beings, you see, are not good with perfection. They crave variety and novelty. Getting exactly the same donuts every time gets boring.

A similar argument can be made about violins. Anyone can make a violin. You can probably 3D print them these days. But a truly great violin is the product of a particular selection of wood, put together by a master craftsman who will carve it in such a way as to make the absolute best of that wood.

Then there is the music. While a violin can play some wonderful, simple dance tunes, it can also go very much off the beaten track. Paganini is the first violinist who is said to have sold his soul to the Devil, and he did not play simple music. This being a book about violins and their humans, there are inevitably music contests. And the piece that Shizuka and Katrina like to play is Bartók’s Sonata for Solo Violin.

Bartók is best known for his piano music, but he did write other works as well. This piece was commissioned from him by the great violinist, Yehudi Menuhin. At the time, Bartók was impoverished and dying of leukaemia, but he wasn’t going to let the great man down. In the end, Menuhin asked for a few changes to the piece because it was just too complex. In particular, he objected to Bartók’s use of quarter tones, which are pitched half-way between the notes of the standard chromatic scale that you get on a piano. To Western ears, quarter tones can sound quite dissonant.

Not being a musician, I was having trouble understanding what Aoki was getting at here. But then I listened to this podcast, which is part of a new series by Cerys Matthews and Jeffrey Boakye. The episode starts out with “Old Town Road” by Lil Nas X and then wanders off through discussion of Rap, Country and Classical music. The bit that gave me a lightbulb moment is where Cerys and pals are discussing the “Perfect 5th”.

What’s that? Well it is a particularly nice-sounding pairing of notes that is used a lot in bugle music and has since found its way into other types of heroic narrative. It is found, for example, in Aaron Copland’s “Fanfare for the Common Man”, which is often used as music for TV shows about space.

John Williams used it in his theme for the Christopher Reeve Superman movie, and even more famously in Star Wars.

Then Cerys noted that the Perfect 5th is the music of the American Establishment, and that anti-establishment music is anything but clean-cut and perfect. Jazz and Blues tinker about all over the place.

Then everything fell into place. Aoki is using the Perfect 5th as a metaphor for the gender binary. And in the perfect, white supremacist, world of 1950s America that’s all that is allowed to exist. Trans people, however, live in the spaces in between genders. We are not perfect. We are, to many people’s eyes, dissonant. And yet, as any donut shop customer can tell you, perfection is sterile. As any violin maker can tell you, beauty is individual and unique to each instrument, or person.

That, of course, is perfect in a way, because Light from Uncommon Stars is a story about the trans condition. Katrina is a musical genius, but she has been shaped in a very particular way because of her trans history. I can’t know whether this book will speak to you the same way that it spoke to me, because you don’t have the same life experiences. But I can tell you that it is Beautiful and True in the way that we often talk of poetry having those qualities. And despite the space aliens, I will insist that it is a Fairy Tale, because that is how it works.

Shizuka had thought that she knew all about being damned. Still, she had always assumed that damnation required some sort of exchange.

Yet this student, this human being, had been forsaken not for ambition, nor revenge, nor even love, but for merely existing?

Who needs the Devil when people can create a hell like this themselves?