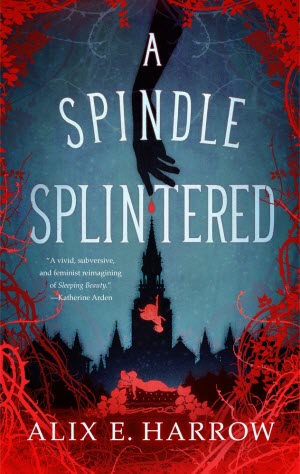 In her Afterword, Alix Harrow describes this novella as that she has Spider-Versed a fairy tale. This does not mean that she’s race-flipped it and set it in modern day New York. Rather it means that she understands that fairy tales exist in many forms in many different realities. Each world in the multiverse has its own Sleeping Beauty, and every so often those doomed girls get to come together to fight against their fate.

Zinnia Gray is one of the least fortunate girls in Ohio. Her parents love her dearly, but she was born with something called Generalized Roseville Malady, a mysterious illness that has afflicted the children of her town thanks to industrial pollution. No child with this condition has made it past their 22nd birthday.

For a Goth-inclined teenager like Zin, this inevitably leads to an obsession with the tragic heroines of fairy tales. In particular, she becomes obsessed with the legend of Sleeping Beauty. Academically there is a plus side, in that she graduates high school early and gets a degree in folklore. Harrow needs this accelerated career for her heroine because the story has to take place when Zin turns 21, and by that time she needs to be an expert in every form of the legend.

For Zin’s 21st birthday, her best friend, a butch lesbian called Charmaine (get it?) throws her a massive party and buys her an actual spinning wheel. But, when Zin dramatically pricks her finger, magic happens, and she finds herself in the realm of the beautiful Princess Primrose of Perceforest, an unfortunate girl who was cursed at birth by a wicked fairy to fall into an enchanted sleep when she comes of age and who, if she survives the curse, will have an arranged marriage to the odious Prince Harold. It is not clear which fate is worse.

Naturally the two girls become friends, and vow to aid each other in avoiding their dreadful fates. Along the way they enlist the help of a few other avatars of the Sleeping Beauty story. It is all great fun, and very lovely, and a bit tear-jerky, and I suspect we’ll see A Spindle Splintered on more than one award short list next year.

I should note as well that the story has a few serious things to say about parenting, and in particular about parenting a child with an incurable illness. It isn’t all fodder for teenage girls of all ages. But I did love it, and I suspect that many of you will too.