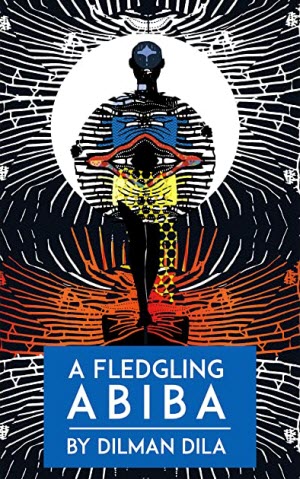 At FanyasyCon I was on a panel about small presses with David Stokes of Guardbridge Books. I didn’t know much about the company, but was impressed when David said he had been doing a lot of work with African authors. A book he particularly recommended as it is a Nommo finalist was A Fledgling Abiba by Dilman Dila. So I bought a copy.

Then I noticed that Dila was on a panel at Octocon, so I figured I would find out a bit more about him and his book. It turns out that he is also and artist and a film maker, so he’s an impressive guy. As for the book, an Abiba is a type of African witch from the region we now call Uganda. They can fly, hence the word “fledgling” in the title, and their means of propulsion is by farting flames. Naturally the book went straight to the top of my TBR list.

Kuri, the heroine of the story, is an orphan teenage girl. Her mother has recently died in mysterious circumstances (which for a witch probably means she was murdered), and she never knew her father. Kuri knows that she has inherited powers. She can look into the eyes of anyone and steal their memories, so she knows everything about them, including how to speak their language. Also, when she gets agitated, little flames erupt from her anus. She doesn’t know much about that, but it is a real nuisance as it ruins her clothes and might set buildings on fire.

Kuri badly needs training, but her aunt, with whom she has been sent to live, is deeply religious and would cast her out if Kuri revealed her powers. Unfortnately, Kuri’s existence is known to powerful people and she’s not going to be able to hide safely for long. Whether these enemies are the people who killed her mother, or agents of her mysterious father, or just random bad guys, is a mystery that Kuri will have to solve.

Dila’s prose is clear and simple. If he wrote in a more Western style the book would probably be much longer, because the plot is absolutely packed with incident. Possibly he’s thinking of a film script. I think it would make a great animation, because it has a lot of comedy potential alongside the action sequences.

Whether it will win the Nommo, given that it is up against Oghenechovwe Donald Ekpeki’s Ife-Iyoku, the Otherwise winner that I reviewed last month, is open to question, but I think it has a very good chance.

Kudos also to Dila for being kind to us readers and explaining a few things about how the languages used by the people in the book work. I had no idea that many African languages indicate plurals by prefixes rather than suffixes. Now I know what Wakanda means.