The Witness for the Dead 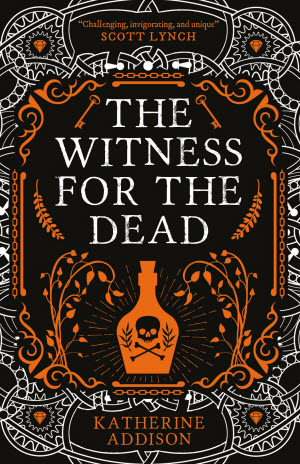 For reasons that I can no longer remember, I did not write a review of Katherine Addison’s The Goblin Emperor. It certainly wasn’t because I didn’t like the book. It was excellent. But it was also a stand-alone, and since 2014 a lot of people have been hoping for another story in the same world. The book was a finalist for the Hugo, Nebula and World Fantasy Awards, and won the Locus Award for Best Fantasy Novel. A sequel would have been an easy sell.

A sequel, however, is not what we have got. Instead there is what is best described as a spin-off. The Emperor Maia does not feature in The Witness for the Dead, except by reputation. Instead, the book stars Thara Celehar, a minor character from the first book who, rather like Mike Carey’s Felix Castor, is able to speak to the dead.

Unlike Castor, Celehar is not a detective. Technically he is a clergyman. His job is to ensure that the recently departed are able to rest in peace. However, in cases where death has been unpeaceful in some ways, Celehar’s abilities can be very useful to the authorities. The central story of the novel concerns a beautiful opera singer whose corpse is found in the harbour of the city where Celehar lives, and from the state of her skull it is clear that she did not drown. An investigation needs to be opened.

So much for the set-up, but there is much more of interest in this book than a murder mystery. To start with there is the world of the book. Maia’s story is typical of high fantasy, being about the struggle for a throne, but while the world is peopled by elves and goblins, they don’t have fantasy technology. Airships are commonplace, and mediaeval fantasy worlds rarely feature opera singers.

More importantly, these are books about race. The elves are fair skinned and often arrogant. The goblins have darker skin and face all sorts of racial prejudice. Maia, you may recall, was of mixed heritage, and therefore a deeply controversial person to be crowned emperor, even if his right to the throne was unimpeachable. Celehar too faces all sorts of prejudice where he is now living, and the fact that he performed a major service for the emperor counts for little.

The Witness for the Dead is a book about a fundamentally decent person who happens to have some small magical talent. Yes, he gets involved in some crimes. He also gets called upon to dispose of an undead at one point. These things are part of his life. But mostly this book is about people. In fact I think it is something of a masterclass in how to write a fantasy book that is centred on people. Sure there are elves and goblins, and Celehar does do a little magic, but what is really important to the story is how he relates to other characters. And frankly, that’s mostly how detectives solve crimes.