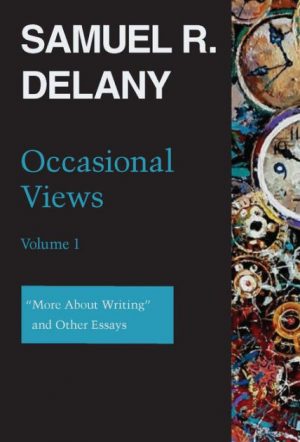 Slowly but surely, Wesleyan University Press has been bringing out a number of volumes collecting the non-fiction work of Samuel R Delany. Occasional Views: Volume 1 – “More About Writing” and Other Essays is the latest in that series. There are quite a few essays in the book, on a wide variety of topics. I’m still working my way through them. But I wanted to write a review now because some of the essays touch on issues of racism and homophobia. Delany has been part of the industry for a very long time, and his experiences are thus instructive. I’m going to pick just one example, from 1977.

In that year, Delany went to the cinema to see a brand new film called Star Wars. He loved it, and wrote a rave review of it for Cosmos magazine. But he did spot the lack of diversity in the cast. He noted, “When you travel across three whole worlds and all the humans you see are so scrupulously Caucasian and male, Lucas’s future begins to seem a little dull.”

Remember that Star Trek debuted on American TV in 1966, and Gene Roddenberry had made a point of having both gender and racial diversity amongst the crew of the Enterprise. He might not have done the world’s greatest job of it, but he tried. Eleven years later, Lucas made rather less of an effort.

Delany’s review of Star Wars is one of the essays reproduced in Occasional Views. But, in preparing the book for publication, Delany opted to add a footnote. Here’s how it starts.

Shortly after my review of Star Wars was published in the November 1977 edition of Cosmos, I came into the office, where I had been working as David Hartwell’s assistant on the magazine. On the desk was a large pile of mail, which apparently was responses to my review. Indeed, I had never published a piece of non-fiction before or since that so quickly received that much.

I began to open them and read them one after the other and realized, to my astonishment, I had a pile of hate mail in front of me. The only part of my review that anybody chose to respond to were the five paragraphs, out of twenty-nine, that talked about the lack of diversity in the film. By and large, the young, clearly white, mostly male readers had been infuriated.

This is 44 years ago, but the reaction that Delany was getting here is still very familiar today. White people, and particularly white men, still see the presence of anyone not like them in what they see as “their” stories to be a threat of some sort. Isn’t it time they grew up?

By the way, John W Campbell and Isaac Asimov do not come off well in Delany’s essay on “Racism in Science Fiction.”

I’ve had some pretty unpleasant experiences in the SF&F community in my time, but they are nothing to what Delany has experienced, and I’m assuming that the same is true of most, if not all, non-white authors. We may well have been better than the wider society of the time, but we should still be ashamed of ourselves.