In the Watchful City 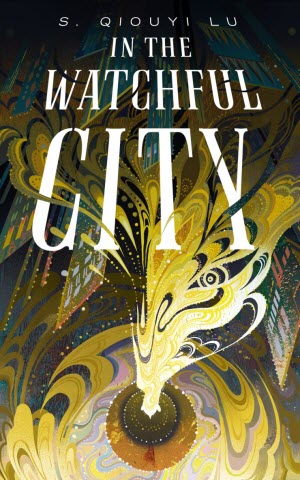 Somewhere in the far future there is a city called Ora that takes good care of its citizens. It watches them, very carefully, for any sign of discontent. It would not do for any of them to be unhappy, or doing anything illegal, would it?

Anima is a Node in the central hub of the city. Ae spends much of aer life in a tub of amniotic fluid, plugged in to the central systems of the city. Ae is able to hop bodies between the various forms of (artificial?) wildlife that inhabit the city. Aer job is to watch for anything untoward, and to prevent it if ae can.

Into Anima’s life comes a person whose name is Vessel. Se is able to come and go in the city without detection — something that should be impossible. Yet se does not appear to be committing any crimes. Se carries with ser a large chest full of odd mementos. Each one, se says, has a story attached. If Anima would like to hear the stories, ae can. The only price is that ae must donate an item of aer own, and an associated story, to the collection.

Watching people is Anima’s job. Of course ae is intrigued.

This, of course, is a well used story structure. We are familiar with it from The 1001 Nights, and from Cat Valente’s The Orphan’s Tales. In The Watchful City, S Qiouyi Lu uses it as a means of wakening Anima from aer from aer unquestioning acceptance of Ora and its rules.

I note in passing that both The Watchful City and Light Chaser, reviewed elsewhere in this issue, tell the story of someone who unthinkingly partakes in a highly oppressive society, as an agent of that oppression. In both cases the central character comes to learn the error of their ways. There’s a theme going on here.

Back with The Watchful City, one of the things you will have noticed is that both Anima and Vessel use neopronouns. We do not know what genders these refer to. It does not matter. We might not even understand them if we were told. It is probably also the case that no one in the story is white, though some of the characters have Western-style names. Again this does not matter much to the story. Both of these things will presumably infuriate those readers who see themselves as great thinkers but cannot cope with fiction that challenges their perceived reality in any way.

That said, The Watchful City is a challenging read in many ways. It does not hold the reader’s hand along the way. Parts of it are told in verse. The stories that Vessel tells, and the glimpses we see of Anima working at aer job, are not happy tales. What we can say is that the people in Vessel’s stories are all alive in a way that the people of Ora are not. They dream, they want more for themselves, they are able to make choices. Often they make very bad choices, but at least they were free to make them. No one was watching over them to ensure that they did not do anything foolish.