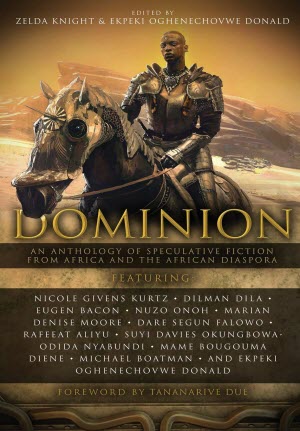 This year’s Otherwise Award (formerly the Tiptree) has gone to a novella published in the anthology, Dominion: An Anthology of Speculative Fiction from Africa and the African Diaspora. The story is by Oghenechovwe Donald Ekpeki who also co-edited the anthology with Zelda Knight. I’ve not had a chance to read the whole anthology yet, but I have read the winning story, and I can see why it won.

The story is set in the village of Ife-Iyoku in an un-named African country. We learn that there has been a devastating nuclear war, and Ife-Iyoku is now cut off from the rest of the world. On the plus side, the villagers appear to have developed mutant powers. But the village seems to be too small to become a self-sustaining population. Every life is precious.

The main characters are Morako, the son of the chief, and his girlfriend, Imade. They are clearly very fond of each other, but Imade is not yet ready for marriage and children. Morako, being a decent young man, is happy to let her take her time. The village elders, including Morako’s father, take a very different view. The village needs children.

Meanwhile there is the wider question of the survival of the village. Much of the land around it is a devastated wilderness, but how far does it extend? Could there be other people on the far side? Could they be contacted, and would it be safe to do so?

The jury, in their comments, made much of how Ekpeki had crammed so many ideas into the story (did I mention the lava-breathing dinosaur?) and yet makes the whole thing work within the confines of a novella. However, the aspect of the story that will have won it the award is the way in which it simultaneously tackles issues of colonialism (bad outsiders) and a regressive social structure (bad insiders). To quote the jury, “What does it look like to have gender roles enlisted in the pursuit of a community’s survival against larger, aggressive, unreasoning entities?” The conflict between wanting to be free of colonialism, yet not falling into aggressive patriarchy, is very real in much of Africa today.

The Otherwise Honour List also includes some fine works. The Four Profound Weaves and City of a Thousand Feelings have been reviewed here, and I’m delighted to see Isabel Fall’s “Helicopter Story” get some recognition. The full result of this year’s award can be found here.