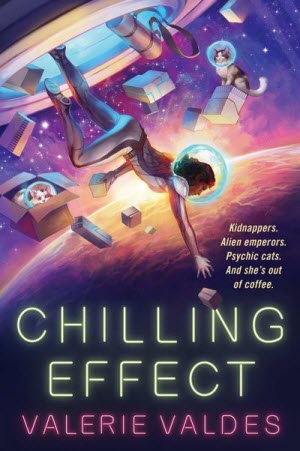 The lovely people at Mr B’s in Bath had a display up of Clarke Award finalists. I hadn’t read all of them, and decided to take a look. I did not manage to pick the winner, which was The Animals in that Country by Laura Jean McKay. I’ll get to that one eventually. But I was going off covers and blurbs, so the book that caught my eye was Chilling Effect by Valerie Valdes. It promised space opera and psychic cats. Now admittedly that’s not the sort of sophisticated literary novel that usually attracts the Clarke judges, but how could I go wrong?

The book follows the adventures of one Captain Eva Innocente, notorious smuggler and all-round badass. Having quit her father’s criminal business and tried to find work that weighs less heavily on the conscience, she has put together her own ship with the expected group of talented misfits. But, of course, her old life won’t let her go. A very much bigger criminal empire has kidnapped her sister and wants both her and Dad to work for them to earn Mari’s release.

So much, so like a cartoon. Eva and her friends get sent on shady missions, which go horribly wrong, and they have to shoot their way out of trouble. If that’s all that there was to this book, I don’t think it would have got on the short list.

Therefore there must be more, and of course there is. To start with, the book features that staple of space opera, the mysterious artefact from a long-lost high-tech civilization that no one can now understand. Given that the people who built this stuff also built the perfectly functioning but wholly mysterious stargate system on which the entire galaxy depends for commerce, this is a big money caper.

In addition, Valdes has a story arc in mind for her heroine. At the start of the book, Eva is very much self-absorbed and in business purely for the fun of it. Which might be how she came to turn her pretty nose up at the advances of a fantastically wealthy alien emperor and cause him to vow to hunt her down and add her to his harem by force rather than by seduction.

Eva, meanwhile, is enamoured of Vakar, her engineer, who is a type of alien that communicates by smell. But she is well aware that a romance with a member of her crew is terrible for discipline and morale. As the story unfolds, she has to learn to treat her crew as family, rather than people to manipulate into helping her get what she wants.

Talking of the crew, the most sensible among them is Dr. Rebecca Jones, a.k.a. Pink, the ship’s medic. It is her job to patch Eva up after each mission. She’s also a Black trans woman. The trans thing is very much a blink-and-you’ll-miss-it moment, but it is there. Other than that, Pink is an ordinary, or rather an exceptional, member of the crew. She is rather high femme, and some trans readers might see her as a bit of a stereotype, but I’m absolutely cool with trans characters in books being able to have any identity that suits them.

It is worthy of note that Eva is Cuban by ancestry. The book is peppered with phrases in Spanish, including many chapter titles. I haven’t tried to translate them. Knowing Eva, many of them will be colourful insults that Google will pretend not to understand. Also Cuban Spanish may be quite different from the Spanish that online translators understand. My enjoyment of the book wasn’t marred by my lack of translations.

I should also note that, while the story in the book comes to a satisfying conclusion, some of the story arcs do not. The truth behind the alien artefacts remains obscure, as are the motives of the evil criminal empire. There will be a sequel. Which is just as well.

Do you remember that I mentioned psychic cats? Well, obviously they get in the way in the cutest way possible at various points during the narrative, but they don’t have a huge role in the story. I spent the entire book expecting them to be a furry version of Chekov’s Gun, and that they would become an integral part of the plot eventually. That never happened, and therefore they are still awaiting their starring moment. I guess I will have to keep reading to see what the sneaky little furballs eventually get up to.