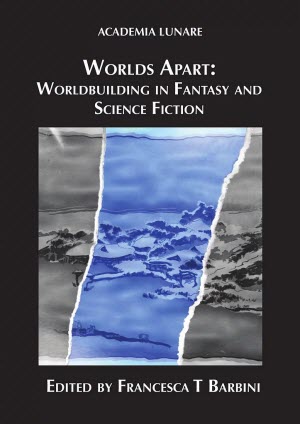 This is less of a review and more of an advertorial, because I have an essay in this book. Worlds Apart: Worldbuilding in Fantasy and Science Fiction (to give it its full title) is the latest volume in the Academia Lunare series from Luna Press Publishing, edited by Francesca T Barbini. My essay is titled, “Worldbuilding with Sex and Gender”, and it full of good ideas for making your aliens queer. That’s enough of that. What else is in the book?

Of immediate interest is the essay by Claire Burgess on the work of William Blake. As I have said elsewhere in this issue, I don’t think Blake would have seen himself as doing worldbuilding. He was just explaining the real world as he saw it, to people who lacked his insight. But to the rest of us Blake is very clearly practicing mythography and I’m pleased to see him in a collection such as this.

Tangentially related to this issue is an essay by my Finnish friend, Jyrki Korpua. He has taken a sabbatical from writing about Tolkien, and is instead explaining the Nordic roots of Disney’s Frozen franchise. We probably all know that the original film was based on The Snow Queen by Hans Christian Anderson, but Disney’s team has put a lot of work into reflecting aspects of Nordic culture in the films.

There is, of course, an article about Tolkien in the book. There’s also one about Le Guin, and delightfully one about Ngũgĩ wa Thiong’o. Those all join the Blake in focussing on a particular author. Other essays, such as mine, focus on general techniques. I was particularly interested in “No Elf is an Island” by Ricardo Victoria-Uribe and Martha Elba González-Alcaraz. This uses something called System Theory to examine the practice of worldbuilding – what works and what doesn’t – by examining a number of well known fantasy worlds. Along the way the authors note:

However, when the author adds details upon details without reason, or to justify post facto things that were left out or are inconsequential to the larger plot, they feel like add-ons, patches to the story, in detriment to its organic growth, as had happened to the Wizarding World by JK Rowling in recent years.

The essay that I was particularly keen to read was, “Town Planning in Viriconium: M John Harrison and Worldbuilding,” by Peter Garrett. As Garrett well knows, Harrison is allergic to the very idea of worldbuilding. The Viriconium project is, at least in part, an exercise in undermining the concept. I was particularly interested to see Garrett invoke reader-response theory, because part of the nature of Viriconium is that everyone who discovers it perceives it in a different way. I don’t have time to re-read the books, and then go back and re-read Garrett’s essay, but I have a feeling that this could be the start of a much larger conversation.

There are several other essays in the book that I haven’t had time to look at yet, but the bottom line is that I really appreciate what Barbini is doing with this series. Occasionally I wish she would encourage contributors to tone down the academic stiltedness of their contributions, but overall I am delighted that someone is publishing a regular series of interesting discussions of our genre(s).