The Album of Dr. Moreau 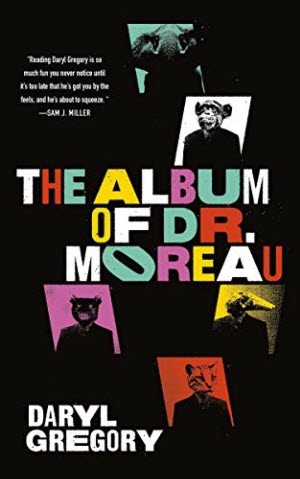 What if the creatures from The Island of Dr Moreau escaped, moved to the USA, and started a boy band?

No, I’m serious, that is exactly the premise of Daryl Gregory’s latest book, which I think is a novella (the Kindle app says it has 141 pages, but does not give a word count even though it very easily could). Of course that’s not all there is to the story. It is also a murder mystery, a meditation on the phenomenon of boy bands and the awful music industry practices that allow them to be created and exploited. There’s also stuff about eugenics, and the USA’s obsession with immigration, and a whole lot more stuff. Stick with me here, it will be worth it.

The WyldBoyZ have just played a hugely successful gig in Las Vegas. However, the following morning their manager, Maurice Bendix, known as Dr M, is found brutally murdered. Bobby O, who is part ocelot and very well endowed in the claw department, swears that he didn’t do it, even though he woke up next to Bendix’s eviscerated body and was covered in the dead man’s blood.

This is clearly case for Detective Lucia Delgado, primarily because she has a good track record in dealing with celebrity crime. She used to be a stage magician, so she has some understanding of the show biz mindset. Luce has only two problems. The first is that her teenage daughter, Melanie, is the WyldBoyZ’s biggest fan. And the second is her partner, Mickey Banks, who has a penchant for truly terrible puns.

Oh, and there’s finding out who actually killed Dr M, so I guess that’s three problems.

It’s not like there is any shortage of suspects. Dr M is an amalgam of everything bad about pop industry impresarios. He’s very clearly cheating on his charges, right down to giving himself writing and production credits on all of the songs even though he has no part in creating them. All of the band have good reasons to hate him. Well, all except Bobby, but that’s only because Bobby is so sweet that he couldn’t hate anyone for more than a few seconds. Then there’s Mrs M, who also hates her husband and is having an affair with Devin, the chimp member of the band.

Naturally, solving the murder also requires digging into the mystery of the WyldBoyZ’s origins in a secret maritime research lab, how they came to escape, and how Maurice Bendix found and enslaved them.

For 141 pages, there is one heck of a lot packed into this book. I was very impressed. I figured out some of how the murder was done before the end, but that was only because Detective Delgado is very good and occasionally has Banks do things do check out her suspicions. I did not see the big reveal coming, but I will note that The Album of Dr Moreau is also a science fiction story, as it should be given its ancestry. It is also obvious that Gregory knows a lot about music, from how pop songs are actually put together to the history of boy bands from the Beatles to BTS.

Oh, and the whole thing is packaged as a concept album, with each chapter being a distinct track. Of course it is. Doubtless available on Island Records.