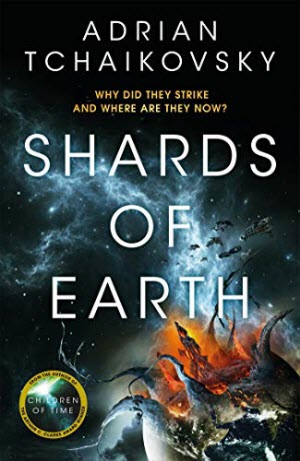 I have been meaning to catch up with Adrian Tchaikovsky’s work for some time. He’s clearly on the cutting edge of modern SF, and I’ve really enjoyed the readings I have heard him do. All I needed was a suitable entry point; a new series that I could make a start on. Shards of Earth fits the bill nicely.

Moon-sized sea urchins? Yes, you heard right the first time. They are called Architects, though they don’t seem to actually build anything. More typically they will take existing things and re-shape them according to their rather eccentric artistic whims. This usually involves shredding things into bizarre shapes and putting things that were on the inside onto the outside. Items of space real estate likely to be re-shaped in this manner include spacecraft, orbitals and planets.

(As an aside, I have this odd feeling that the idea for the book might have come, in part, from Season 5 of Agents of SHIELD with its startling images of Earth after its destruction by Quake.)

Given that the Architects proved invulnerable, implacable, and entirely uninterested in communicating with the subjects of their artistic endeavours, this constituted a major crisis in which all intelligent life joined together as one to oppose them. Or at least to provide evacuation fleets and new homes for the refugees.

Still the Architects would have won easily, had humankind not accidently discovered how to talk to them, or at least get their attention. The Intermediary Program involved the identification and training of humans with a rare biological aptitude for interfacing with the fabric of the universe and thereby being able to make a loud enough noise on the right communication channels for the Architects to notice them.

Most Intermediaries died in the training program, but a few survived long enough to be sent into combat. They made contact. The Architects went back to wherever it was they had come from. The galaxy heaved a collective sigh of relief.

Fifty years later we have a book. Yes, this is an After the War novel. Idris Telemmier, the hero of the Battle of Berlenhof, the man who made the Architects go away, is in retirement. Well, more accurately he is in hiding. The Council of Human Interests, colloquially known as “Hugh”) would love to have him back in their service, which is why he is hiding out as the pilot of an elderly salvage vessel with a rag-tag, dysfunctional-but-lovable crew. Intermediaries, it turns out, make superb hyperspace pilots, so he earns his keep.

The crew of the Vulture God fits neatly into a standard SF trope that is quite popular right now and probably owes a lot to Firefly. There are several of them, but I want to highlight two. Firstly there is Kris, who is a disgraced elite lawyer. Her job is to make sure that the contracts the crew enters into are watertight, and to keep Idris out of the clutches of Hugh. Secondly there is Olli. In our time she would doubtless be described as having “birth defects”, but she turns out to be an absolute genius at interfacing with waldos of all sorts, which is really useful in space.

Is there a plot here, Cheryl? Yes, of course. Remember that we are 50 years after the war. What happens when memories of shared peril fade? Correct, former allies start fighting among themselves. In particular there is growing antagonism between Hugh and The Parthenon.

Is this something to do with Athena? Well yes, because Athena was born without a mother, hence the term “parthenogenesis”, which should be familiar to readers of feminist SF and my essays on interesting biology. The Parthenon is a community of genetically engineered, vat-grown women warriors. They are an elite fighting force, physically perfect, and trained from birth for that purpose. They see themselves as guardians of the galaxy. Everyone else sees them as a dangerous military dictatorship. Most importantly for our purposes, The Parthenon does not possess the knowledge of how to make Intermediaries. And Hugh is terrified of what they will be capable of if they acquire that technology.

So, a plan. Myrmidon Solace has been kept in cryo-sleep for most of the past 50 years, just in case her experience might be needed again. Thanks to being in the right place at the right time, Solace ended up as the personal bodyguard of Idris Telemmier at the Battle of Berlenhof, and continued in that role for the remainder of the war. Any two young persons thrown together in circumstances of mortal peril are bound to develop some sort of bond. The Parthenon’s High Command thinks that Solace might be able to persuade Idris to defect.

That’s mostly your set-up. Solace wants to persuade Idris to help her people. Idris just wants to disappear. The crew of the Vulture God mostly just want to get on with their next contract in peace, except for Olli who wants to get rid of the vile, eugenicist Parthenon woman as quickly as possible, and with extreme prejudice. And don’t forget the giant clams – sorry, the Essiel – because they do have an empire, and they do want the rest of the galaxy to submit to their rule, because everyone will be so much better off being taken care of by superior beings.

It is a common nostrum that science fiction books are not about the future, they are about the now of when they are written. That is absolutely true of Shards of Earth. A key element of the story is the inability of human politicians to unite against an existential threat until it is way too late. The Essiel have clearly been taking a leaf out of the Vladimir Putin playbook, fostering the growth of populist, far-right movements in Hugh territory to distract and weaken human government. On a personal level, Solace struggles with being seen as an agent of an Evil Empire when all her recent memories are of saving the galaxy from destruction, while Olli’s understandable distrust of eugenics, and therefore hatred of Solace, causes fractures among the crew of the Vulture God. It is all very spot on.

Finally, we have that core feature of space opera, the mysterious ancient civilisation. Who were the Architects? Where did they come from? Why did they leave so suddenly? And most importantly, will they be back. You know the answer to the last of those. The other questions are what will keep you reading eagerly to the end of the trilogy.