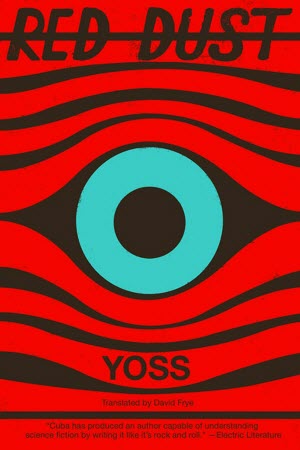 Yoss, I am told, is a legend of Cuban science fiction. I am ashamed to say that this book is the first I had heard of him. If you haven’t either, there’s an interview with him on his publisher’s website which reveals that he also fronts a heavy metal band. Interesting chap.

Red Dust is a mystery novella staring a robot detective. Raymond lives and works on a giant space trading station called the William S Burroughs. It was constructed by the Galactic Trade Confederation when they discovered the Earthlings. It is parked out near Saturn and acts as a gateway between the humans and the rest of the galaxy. Quite rightly, the alien races who run the Confederation, don’t entirely trust these unpredictable new creatures.

If you are expecting a galactic Confederation with almost-friendly aliens such as Vulcans and Ferengi, think again. There are three alien races in Red Dust. There are the xenocidal insectoid Grodo, the huge, reptilian Colossaurs, and the Cetians who look exactly like humans but very much aren’t. All three races are entirely out for their own interests. We shouldn’t be surprised that a Cuban writer has a much darker view of galactic society than those of us who live in countries with a seat on the UN Security Council.

Raymond is actually a security droid, a Positronic Police Force officer or “pozzie”. His real identifier is MSX-3482-GZ, but he happens to have a passion for 20th Century English-language literature, in particular noir detective stories, hence his name. Some of his colleagues have different passions. They have adopted names like Zorro and Achilles. There are, of course, no dingy bars on the Burroughs. Nor are there beautiful dames who might lead an unwary gumshoe into danger. There aren’t even any murders. The security is too good. So when one does happen everyone is caught by surprise.

Naturally the authorities panic, and Raymond, having been very close to the incident and far too curious for his own good, gets put in charge of the investigation.

From there things escalate rapidly. I got the impression that Yoss had made his antagonist a bit too powerful, and consequently poor Raymond was robbed of much of his agency, but the ending worked well enough for me to be happy with the book. There are a fair few robot jokes along the way, which helped.

The one thing that concerned me about the book is the inclusion of a bunch of characters who are from a Roma community. They seemed to be a bit of a cultural stereotype. Not being Roma myself, I’m not going to pass judgement, but I would like to know what actual Roma think about the book.

Talking of translation, David Fyre appears to have worked on a number of Yoss’s books. That’s always a good sign because author and translator will have had time to build up a good working relationship. Fyre has done a fine job here.

The book is only a novella, so it is a short read. I enjoyed it. Why not try a bit of Cuban science fiction for a change?