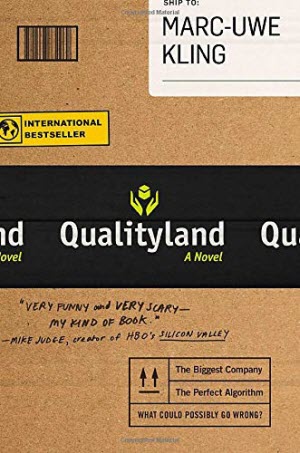 In the near future, Germany, or possibly the EU, has taken the sensible step of declaring itself to be the Best Possible Country. Welcome to QualityLand, where life has never been better, and everyone has exactly what they want.

That is the premise of a novel by Marc-Uwe Kling, which was apparently a huge hit in Germany, and is now available in English translation. If I were doing an elevator pitch for it, I would describe it as the love child of Cory Doctorow and Douglas Adams. Kling has all of Doctrow’s fascination with the effect of the internet on society, but approaches it with the surreal, acerbic comedy of Adams.

The first thing that you will notice about QualityLand is that a new naming convention has been adopted. Boys are given a family name according to their fathers’ occupations; girls are given a family name according to their mothers’ occupations. Thus, of course, we have names like Henryk Engineer, and Hans Lorry Driver, coupled with names like Hannah Hairdresser and Melissa Sex Worker. If you have started to see a problem, I can add that Tony Party Leader is in fact the leader of the Progress Party, just as his father was.

Doctorow, when he was younger and less cynical, once wrote a novel extolling the virtues of a social ranking system called wuffie. Kling knows exactly how this will turn out. Every citizen has a Level rating, and the higher your level the more social privileges you have.

Of course everyone is happy, because they are sold everything they want by TheShop, a monopoly online retailer. You don’t even have to browse. TheShop knows exactly what products to send you, based on your Level, your interactions on the Everybody social network, and its infallible algorithms. QualityPartner will recommend romantic interests for you in the same way.

Our hero is a chap called Peter Jobless. He’s not actually jobless because he has inherited a scrap metal business from his grandfather. Peter actually wanted to be an AI psychologist, but it turned out that helping AI’s with mental problems is classed as a form of repair, and repairing anything has been made illegal as it is a threat to TheShop’s business model.

So people give Peter dysfunctional machines to dispose of. But he’s a soft-hearted chap, and once he’s been given something to destroy he becomes its owner. He can’t bear to actually put a thinking machine in a scrap metal press, so he keeps them all. Thus he shares his home with a LawBot who has developed a conscience, a CombatBot with PTSD, a tablet that has read too much Marx and Lenin and wants a robot revolution, a male SexBot who has fallen madly in love with a client and can’t get it up for anyone else, and an AuthorBot who wants to write science fiction. It is all very reminiscent of Doom Patrol.

Meanwhile there is an election going on. The President for Life is dying, and a new one has to be elected. (It is a woman president, doubtless this has specific meaning for German readers.) The far-right QualityParty is putting up a loud-mouthed TV chef turned politician, Conrad Cook. Cook’s face is on the wrapping of half the food sold in TheShop so he has plenty of voter recognition. In desperation Tony and his colleagues decide to take the unusual step of putting up a candidate who is an android.

So politics jokes, Amazon jokes, sex jokes, and some serious discussion of where modern society is going. It is a heady mix. There is a definite male gaze to the text which some female readers may find tiresome, but the female characters do get a fair amount of agency and some of them come out on top, so I’m prepared to forgive Kling. It isn’t often that I enjoy a comedy novel, but this one had me laughing out loud in places.

QualityLand is translated from German by Jamie Lee Searle, who does a fine job of keeping just enough German references to keep the sense of setting while making the text eminently readable.