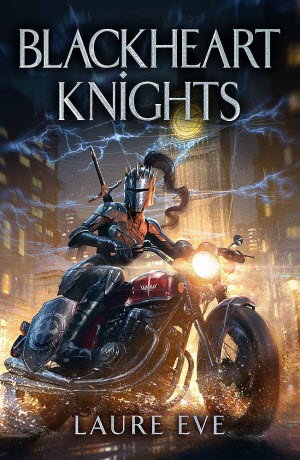 Arthuriana is clearly in the air at the moment. We have had the massively different takes of Legendborn and SisterSong, both of which I loved. We have Spear due from Nicola Griffith coming very soon. And we also have Blackheart Knights from Laure Eve. It has a woman in armour on a motorbike on the cover. How could I possibly resist?

Blackheart Knights is set in a future version of London that still has a veneer of technology but has reverted to a mediaeval society. Duelling by highly trained and presumably neutral gladiators (knights) is an acceptable way of settling legal disputes. Money is in the form of batteries, known as “tricks” because they contain electricity. There’s some very interesting worldbuilding going on here.

The story is told in two threads that will meet in the present day. One is told over a single year and features a young woman called Red who has a burning desire to become a knight. The other is told over nineteen years and tells how Art Dracones, bastard son of King Uther, wins the crown for himself and sets out to build a better society.

There’s not a huge amount more than I can tell you here, because you all know Arthur’s story and anything I say could easily become a spoiler. There are things that shouldn’t be spoiled. What I can tell you is that magic is a key part of the story. There are people whom Eve calls “godchildren” and whom I shall call “mutants” because that fits the near future setting much better. As with the mutants that we know and love, there are various groups of powers, but each individual is unique. Naturally they are viewed with deep suspicion by ordinary humans.

I loved much about this book. The worldbuilding is fabulous: just enough detail to be unique and fascinating, not too much to overwhelm the story. There are some great characters, with some nice innovation on the standard Arthurian cast. Gawain (sorry, Garad) in non-binary. Where I think it falls down is that it ends too quickly. Possibly it has to be constrained to a single volume for the story to work as conceived, though that’s sad because there is so much Arthuriana to play with. But the sudden rush to a climax in the last few chapters feels too pat and a bit forced.

Nevertheless, if you are into Arthuriana, or even just things like Shadowrun, I’d recommend this book. There’s a wealth of imagination on show here. I can see people setting role-playing campaigns in this world. As with the original Arthur cycle (and Pendragon which is based on it), everyone will know how the story ends, but there is 19 years of history to play out in order to get there. I think it would work very well.