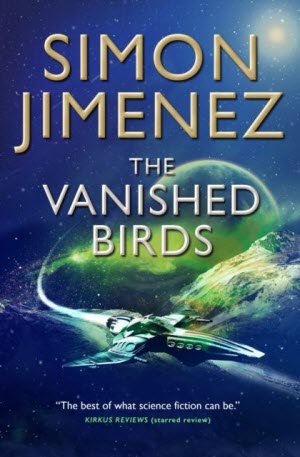 Simon Jimenez is one of the finalists for this year’s Astounding Award. I had been unaware of his debut novel until recently. It is now in the top ten list for Debut Novel in this year’s Locus Awards. And the other day Roz Kaveney phoned me up to rave about it. I can take a hint.

The cover on my edition is a little weird. There’s a spacecraft scene, so we should be expecting a space opera, and then there is this very odd quote from Stephen Baxter that reads, “An astonishing debut. Ursula K Le Guin… Kim Stanley Robinson… Simon Jimenez.” Presumably Baxter was comparing Jimenez to those other SF luminaries, and the PR people at Titan had to butcher his second sentence to get it to fit on the cover.

From there things get a little more confusing, because The Vanished Birds does not follow any accepted ideas of how to open a novel.

Chapter 1 is all about a young farmer called Kaeda who develops an obsession with a woman from the space fleet that comes to his planet every fifteen years to buy their produce. Thanks to relativity, Nia barely ages from one Shipment Day to another, while Kaeda becomes a man, then a leader of his people, then old. The only other piece of plot is that Kaeda rescues a strange young boy from a crashed spacecraft. As the boy is an outworlder, Kaeda gives him to Nia to take care of.

Chapter 2 takes place aboard the starship Debby. Nia, it turns out, is the captain. Her crew are not overly enamoured of the strange boy who cannot speak, but appears obsessed with music. Fortunately their journey is not that long, and eventually they find themselves once again approaching Pelican Station.

Chapter 3 takes us back to the dying Earth, where a young woman engineer called Fumiko Nakajima is about to make a name for herself by designing the magnificent space stations that Umbai Corporation would one day build as homes for those people rich enough to flee their wreck of a planet and make a new home among the stars. The project, developed in deepest secrecy by Umbai, costs Fumiko the love of her life, because loyalty to the company comes before all else. Fumiko names the stations, and designs their looks, after her favourite species of birds that she loved as a child, when there were birds.

We are now, according to my Kindle, 27% of the way through the book, and we have no idea what is going on. Fortunately Chapter 4 sees Nia on Pelican Station meeting up with its designer who, thanks to a variety of technologies, is now 1000 years old. Now, at last, we start to understand what a strange, traumatised boy who walked away from a seemingly deadly spaceship crash might mean for the rest of humanity, and the roles that Nia and Fumiko will have in shaping his future.

Of course, this is not what the book is about. Yes, there is a story about Nia, Fumiko and the boy. But The Vanished Birds is a meditation on something very different: colonialism. Jimenez is using his space-bound civilisation as a metaphor for the Earth-bound world of the 16th to 18th Centuries when superior technology and command of the seas enabled countries like Britain to build up world-wide empires based on commercial exploitation of the rest of the world.

Jimenez’s story does not have slavery in the same way as we did, but it is clear that most people in his world are controlled by corporations in some way. Kaeda and his people must continue to grow crops, and are dependent on the company ships that will come and buy every 15 years. Nia and her crew are locked into a cycle of trading, barely making enough each time around to live off, and to make repairs to their ship. Fumiko has signed her life over to Umbai. Everything that she does becomes theirs.

As the story develops, we start to see the consequences of corporate greed for other parts of human-inhabited space, and the likely effect, on those planets not yet firmly under corporate control, of the technological secrets that power the plot. The whole thing is expertly done, and I can see exactly why Stephen Baxter chose Le Guin and Robinson as comparable writers to Jimenez. He might not be as good as them yet, but the themes he is working with are also themes those two writers have made much of.

Plus, Jimenez is brave. Now many people would have created a book that takes so long to get into, which spends much time developing characters only to discard them as the plot moves on, and to be quite so political in a debut novel.

For a number of years now, women have dominated the Best Novel category of the Hugo Awards. It is about time that we had a new male writer to get excited about. Simon Jimenez might be just that person.