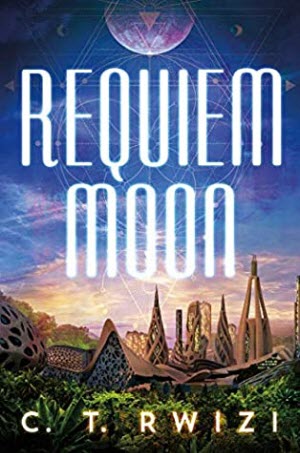 Having enjoyed Scarlet Odyssey, I was very pleased when Julie Crisp offered me book 2 in the series, Requiem Moon. This is what I’m assuming is book 2 of a trilogy, so CT Rwizi has his work cut out making it more than just moving the plot along. Mostly, I think, he succeeds, because he provides a story to anchor this book. This review will contain spoilers for book 1.

The entire book is set in Yonte Saire. Salo and his colleagues have just arrived in the city following the dramatic events of the previous book. Most of the Saire ruling family has been murdered, and the Crocodile clan is poised to seize power. Meanwhile Princess Isa has been declared King, and is hiding out in the Red Temple. To buy time she has agreed to marry Kola Saai, the chief of the Crocodiles, but she desperately needs allies.

Wait, did I say “King”? Yes, the ruler of Yonte Saire is a King, regardless of their gender. It is an Egyptian thing. A nice touch.

Salo spends most of the book finding out about his powers, which turn out to be much more impressive that you might have suspected from Scarlet Odyssey. We also find out a lot more about the world of the books, and it becomes very obvious that this is a “science so far beyond ours that it looks like magic” setting. I like that sort of thing.

Rwizi also uses this book to let Salo’s companions have a little more of the limelight. Ilapara is my favourite, because she’s basically Dora Milaje, but Tuksaad is much more interesting. He is our link to the wider world outside of the Redlands, where there are powerful sorcerers capable of making artificial beings like him. Alinata, the Yerezi sorceress, doesn’t get quite as much action, but then she is there to spy on Salo on behalf of their queen. Salo provides his friends with a few magical toys that Q would be proud of, and towards the end of the book the team gets sent out on a job that feels right out of Mission Impossible.

Inevitably, Salo gets drawn into Isa’s schemes, and that provides him with further opportunities to explore the nature of his world. There is drama, plans come to fruition, and plots within plots are revealed. Rwizi has certainly set things up nicely for book 3. These big fantasy books take a lot of reading, but this one zips along nicely enough, and if you get to the end of Requiem Moon I can guarantee that you will want to know what happens next.