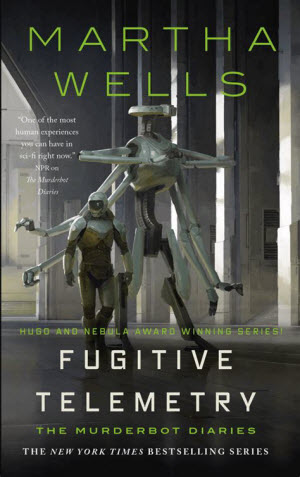 What can you say about a new Murderbot book? Surely you all know the set-up by now? Martha Wells doesn’t have to do much beyond roll her beloved creation on stage and let readers watch him in action. How long can she keep this up for? Well, The Rise and Fall of Sanctuary Moon has at least 397 episodes. Surely Murderbot will want to last at least as long as its favourite soap opera.

To keep things going, Wells has to introduce new plot elements, and new characters. Murderbot is now living on Preservation Station with Dr Mensah and her friends. They are still very much at risk from the vengeful Gray Cris Corporation, but at least they are on home territory.

Unfortunately, the security services on the Station are not keen on the idea of having a rogue SecUnit on their territory. Who knows when it might suddenly murder a whole bunch of people? It is a Murder-bot, after all. Murderbot would much rather sit quietly and watch media, but it does have to keep Dr Mensah safe, so it needs to find a way of getting along with this desperately incompetent bunch of humans trying to do a job it is so much better suited for.

Then they find a dead body.

Fugitive Telemetry is a murder mystery. Technically, I suppose, it is a locked station mystery, because the first thing that happens after the discovery of the body is that Preservation Station is put into lockdown so that the perp can’t get away. Station Security suspects Murderbot. It is, after all, a professional killer. Murderbot is worried because the perp seems to have abilities well beyond those of the usual human thug, which suggests that corporate agents are involved.

It is a short book, and you’ll race through it because Wells is very good at what she does. You might, like me, spot a rather obvious suspect very early on, but knowing who doesn’t mean that you know why or how.

To some extent Fugitive Telemetry feels like the middle book of a trilogy. It seems like Wells is introducing us to a setting and some characters, and that something more dramatic will happen using those elements in the near future. Unfortunately “near future” probably means another year to wait before the next Murderbot book. Why can’t we get a new one every week like a proper soap opera?