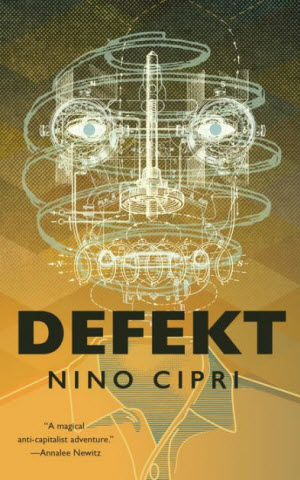 Welcome back to the wild and whacky world of LitenVärld. Yes, the world needs more silly stories about weird Scandinavian megastores selling flatpack furniture, and Nino Cipri is just the person to provide them.

Cipri says in their acknowledgements that they had no intention of writing a sequel to FINNA. However, as often happens with writers, a character got inside their head and refused to shut up until their story was told. Thus Defekt happened.

The character in question is the person we know as “Fucking Derek”. The reason that Amy from FINNA called Derek “Fucking Derek” is because Derek is an ideal employee. He is flawless in dealing with customers, his store uniform is always immaculate, and he is regularly named employee of the month. Derek even lives in a converted shipping container parked at the edge of the store carpark. He has no life outside of LitenVärld. And yet the plot of FINNA hinges on Fucking Derek taking a sick day.

Why? What possible reason could there be for this most devoted of company employees taking a sick day? It is allowed, if you dig deep enough into the Company Handbook, but it is highly unusual. Derek is the last person that Tricia the Manager would expect to take a sick day. This was a mystery that required a new book to solve.

As you may recall from FINNA, one of the more unusual things about LitenVärld stores is that they are prone to opening up wormholes to parallel universes. Mostly this is simply an inconvenience. It doesn’t do to have customers get lost in the twisty and confusing layouts of the store, cunningly designed to prevent anyone from leaving until they have bought something, and fall through a wormhole into another world. The plot of FINNA is rescue mission for one such unfortunate customer.

But LitenVärld would not be LitenVärld if senior management had not wondered whether this peculiar feature of their stores could not, perhaps, be exploited to increase profits. As it turned out, it could.

Most of LitenVärld’s products are made in China to keep costs down. However, shipping large quantities of flat-pack furniture from China to the USA is expensive and time-consuming. LitenVärld has discovered that some worlds in parallel universes are able to manufacture products just as cheaply as the Chinese, and the shipping costs though the wormholes are practically zero. Profit!

The downside of this strategy is that the build quality of products from these other worlds sometimes leaves a little to be desired. Some products are a little defective. Some of those look distinctly sentient. And some of those are downright homicidal.

If it turns out that a LitenVärld becomes home to a sentient chest in the shape of a pig designed for a child’s bedroom, or a sentient luxury toilet, something has to be done. That something is a Special Inventory, carried out by the Corporate Inventory Team. These are people specially trained in the techniques necessary to hunt down and eliminate Defekts. After the events of FINNA, Derek’s store is badly in need of a Special Inventory.

However, each LitenVärld store is unique, so it is useful for the Inventory Team to have a local guide who knows the layout well. Derek would seem to be an obvious choice. Besides, Reagan from Corporate Resource Management has reason to think that he’d fit right in. Thus it is that Fucking Derek gets to spend his own version of A Night at the Museum. In the process he learns far more about himself that he would ever have imaging possible.

Yes, it is very silly. It is also resolutely anti-capitalist. And it is a novella so you find yourself racing through it in no time. When you find yourself with bits of faux-wood spread all around you, and you have no idea what they one odd screw is supposed to go, this is just the book that you need.