A Master of Djinn 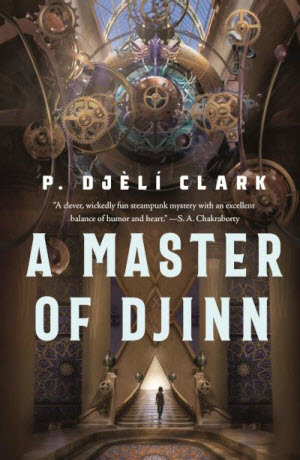 This is a book I have been wanting for some time. Pretty much since I finished reading The Haunting of Tram Car 015 to be precise. I didn’t know then that a novel was in the works, but I am very pleased that it was.

A Master of Djinn is, of course, set in P. Djèlí Clark’s steampunk Cairo where the djinn have returned to Earth thanks to the Sufi mystic, Al-Jahiz. It once again features Fatma el-Sha’arawi, the star agent of the Ministry of Alchemy, Enchantments and Supernatural Entities. Hamed and Onsi also feature in the novel, but only in supporting roles.

Previous stories in this setting have featured magical threats, but this book starts with something much more mundane: the murder of a human. However, not just any human. The victim is Lord Alistair Worthington, also known as The English Basha, a British nobleman who has developed a fondness for Egypt and lives there full time. If the death of one of the richest men in Cairo isn’t enough of a worry, Lord Alistair was also a diplomat. When he died he was in the middle of brokering a peace conference in Cairo at which he hoped the feuding European powers could settle their differences and avoid a war.

Remember, this is a world in which the First World War did not happen, but that doesn’t mean that the tensions that caused it have gone away. Indeed, as we shall see, the advent of magic has given the Europeans a whole new arms race in which to compete.

While this is clearly a major political event, you may be wondering why the Ministry is involved. Well, Lord Alistair was also the head of a secret magical society dedicated to uncovering the mystical lore of Egypt. Nor did he die alone. His entire coven died with him, including a couple of Egyptian members who were associated with the traditional religious movement – that is, the worship of ancient Egyptian gods.

Fortunately the identity of the murderer is fairly obvious. A man in black robes and a golden mask was seen fleeing Lord Alistair’s mansion. He sounds suspiciously like the rabble-rouser stirring up the poor people of Cairo with fiery, anti-government speeches, and by claiming to be a reincarnation of the great Al-Jahiz himself. And who very obviously has magical powers.

This, then, is an obvious case for our favourite suit-and-bowler-hat-wearing lesbian detective. However, things aren’t easy for Fatma. To start with the Ministry has saddled her with an assistant. Hadia is a nice enough young woman, but she’s an orthodox Muslim, albeit prone to scandalously coloured hijabs, whereas Fatma is as unorthodox as they come and is carrying on a passionate affair with a priestess of Sekhmet.

Ah yes, Siti. When I mentioned traditional religion you probably guessed that she’d be involved somewhere along the line. This time she has a stake in the game as she knew two of the victims. One of those victims had a husband, a man call Ahmad who prefers to be addressed as Lord Sobek because he is high priest of the crocodile god. Naturally Ahmad wants revenge but, being a reptilian sort of person, he goes about it in a very crocodile manner. This does not make Fatma’s job any easier, though Ahmad does keep apologising for being creepy.

Then we have the Europeans. Lord Alistair’s family, being British, are insufferably arrogant and useless. The foreign dignitaries arriving for the peace conference are not much better, and some come with friends. Kaiser Wilheim, it turns out, has brokered a deal with the Goblin Court and has brought one of their representatives with him. Raymond Poincaré, the President of France, is rumoured to have been in discussions with the Fae. The Russians too are rumoured to have supernatural allies.

The British, obviously, are too arrogant to have sought magical help.

As you can see, there is a heck of a lot going on. And that’s before the djinn get involved, as they inevitably will. I thoroughly enjoyed the book. That is in part because Clark is an historian and therefore peppers his narrative with all sorts of entertaining titbits drawn both from Egyptian history and folklore. There is, for example, a mention of the infamous Massacre of the Mameluks. And Fatma has to do research in a book called the Thousand and One Nights which, as Clark well knows, comes in multiple versions with different mixtures of stories.

Basically this is all very entertaining but, as anyone who has read Ring Shout will expect, it is also peppered with pointed political references. As to the plot, I saw the reveal coming a mile off, but then I probably have an unfair advantage in this particular case. It didn’t spoil my enjoyment. I hope you enjoy this book as much as I did. And I’m looking forward to sequels. Those goblins are not going to keep quiet for long.