The Last Days of Pompeii 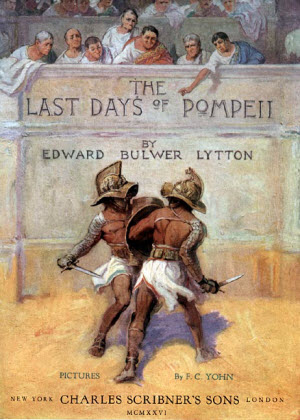 Sometimes I am hoist by my own petard. When Farah Mendlesohn suggested a theme of “Catastrophe” for this year’s Historical Fictions Research Network conference, I immediately wondered what novels there were about Pompeii. When I remembered that Edward Bulwer-Lytton had written a very famous one, I knew I had a perfect topic for a paper. Unfortunately, that meant that I had to read the book.

In my defence, I have read another one of Bulwer-Lytton’s novels. I reviewed The Coming Race in Emerald City back in 2005. It wasn’t that bad. However, it was a science fiction novel with a contemporary setting (well, contemporary for when it was written). The Last Days of Pompeii is a very different beast. It is an historical novel with a Guy Gavriel Kay-like mere hint of fantasy. By Pollux, Bulwer-Lytton takes every opportunity to play up Ye Olde Worlde setting! Your average Roman, it seems, can barely utter a sentence without prefacing it with an oath to some god or other. Pollux gets 15 mentions, compared to a mere 3 for his more boringly-named twin.

At one point, one of the characters exclaims, “Thou liest, base slave!” Reader, I confess that I actually laughed out loud.

The awfulness of the prose, however, is not the worst thing about The Last Days of Pompeii. It was written at a time when racist and sexist stereotypes were widely believed to be scientific fact, and assumptions based on these ideas pepper the narrative. Bulwer-Lytton even uses the term, “physiognomy”, at one point. The hero is noble, blonde, Athenian. The Romans are decadent, greedy and selfish. The villain is Egyptian, so that he can have swarthy skin. Fortunately, Bulwer-Lytton doesn’t seem to have known much about the Queendom of Kush.

The plot isn’t much better, being a melodramatic love polygon involving all of the major characters. Glaucus (the hero) and Arbaces (the villain) are both in love with Ione (who is Greek). Ione, Julia (a rich Roman girl) and Nydia (a blind slave) are all in love with Glaucus. There is a murder, and a love potion, and Glaucus is wrongly condemned to death in the arena. He is saved from this awful fate by an Act of God.

No, dear reader, not Hephaestus, whom one might assume would be responsible for the unfortunate goings on with Vesuvius. The Last Days of Pompeii is, at its core, a book about the dawn of Christianity. Arbaces is a priest of Isis, and a worker of magics, which compounds his villainy. Glaucus and Ione, though sceptical at first, are converted by the end of the book.

All of this is a bit of a shame, because most of Bulwer-Lytton’s research is spot on, or at least as spot-on as it was possible to be in 1834. He had clearly consulted the latest research on the relatively recently re-discovered city. No less a person than Mary Beard was unable to find much wrong with his portrayal of a site she knows well. Even Mary Shelley, while visiting Pompeii for herself, wrote in her diary of how impressed she was with the way that Bulwer-Lytton had brought the ancient city to life. There is actually much to admire in the book.

There is even a little bit of science fiction. Bulwer-Lytton seems to be aware that animals are more sensitive to volcanic activity that humans. When the lion is loosed into the arena to eat Glaucus and one of the Christians, it immediately senses that something is wrong, and with a whimper heads back into its cage. To the watching Romans, this is obviously A Sign, but we, and the author, know that God moves in mysterious ways.

And then the volcano erupts, and chaos ensues, in a fabulously melodramatic fashion.

So perhaps we should cut Bulwer-Lytton a bit of slack. As a writer of thrilling adventure stories, he clearly knew what he was doing. The ancient world was a very fashionable subject at the time, with Britain seeing itself as an empire to rival Rome itself. Bulwer-Lytton picked the name of his villain from Byron’s play, Sardanapalus, which was being staged for the first time in 1934. He picked the character of the Witch of the Volcano from another play of that title that was hugely popular in London in the early 1930s. Even the references to early Christianity where a direct response to Edward Gibbon’s legendary The Decline and Fall of the Roman Empire. (Gibbon, bless him, suggested that the religious intolerance of the Christians might have damaged to happy multi-cultural nature of Rome, an idea that was anathema to a British MP such as Bulwer-Lytton). It worked too. The book has sold over a million copies and has been adapted into 9 movies, 2 TV serials and a musical.

Anyway, the paper went down well, and know you know most of what was in it. I honestly can’t recommend reading the book unless you are into Victorian melodrama, but I feel it important to know that it exists, and to have learned a bit about how Victorians saw the ancient world.