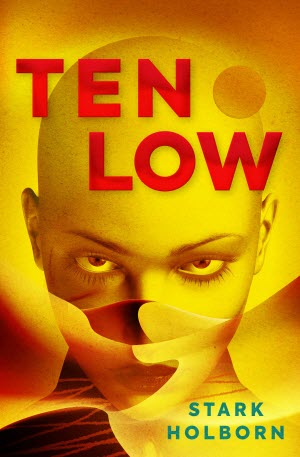 Remember that thing about The Mandalorian being a Western in space? Now imagine what it would be like if an actual writer of Westerns were to do science fiction. That writer is, of course, Stark Holborn. Ten Low is her first foray into science fiction.

The story is set on the moon of Factus. It is small, poor, irrelevant in political terms. There has been a war. There have been atrocities on both sides. The Accord has fought off the rebellion by the Free Limits. But on Factus such considerations are unimportant compared to the daily struggle to stay alive.

Ten Low is a doctor. She travels across the deserts of Factus on a mule, though this being science fiction a “mule” is a single-person utility vehicle. Genuine doctors are in considerable demand, because people do get sick and most people can’t tell real medicine from snake oil. Well, perhaps not actual snake oil, because snakes are among the few animals hardy enough to farm on Factus so actual snake oil would probably be expensive. You get the idea.

I swallow, the noise is loud in my ears. Beyond the tiny fire there’s nothing. Just the wind. Some folk say the wind is alive, that it coils between the stars like a snake. Who am I to say they are wrong?

Into Ten’s life falls The General, and I mean falls quite literally. A spacecraft crashes in the desert. The General is the only survivor. She’s a teenager, but a deadly one. Gabriella Ortiz is a senior officer in the Minority Force, the elite group of heavily augmented child soldiers that were a key part of The Accord’s war effort. Gabi is about as privileged that you can get in Accord society, and very used to command, but she is going to discover that the war is over, and elite supersoldiers are not needed in peace time.

That’s the basic set-up, but the plot is basically a series of escalating encounters in which Ten and Gabi get into worse and worse scrapes with more and more dangerous inhabitants of Factus. There’s a certain lack of agency here, but the story drags you along at such a lick that you don’t notice it. Along the way we get to learn a lot more about Ten, including why she has a number for a name, and what she did in the war. We also learn a lot more about the Ifs, the mysterious aliens who seem to be native to Factus.

There are some great characters in the book besides Ten and Gabi. For example, there’s Malady Falco, the one-eyed “businesswoman” who runs a Benzenery in one of the larger towns and specialises in the movement of goods outside of official channels. There’s also Ma Esterházy who runs a saloon and brothel in the remote town of Angel Share, but was once the most notorious smuggler on Factus. Oh, and there’s Marshall Joliffe who sees his job as ridding Factus of perverts and degenerates.

Ten Low is the sort of story that The Mandalorian could have been, were it not tied to the Star Wars universe and happy to deliver fan service rather than work on the script.

Stark sent me a review copy of this book. It isn’t out until June, but you can pre-order it now. Alternatively, you can look for Advanced Triggernometry, which is available on April 8th. I know I want a copy.