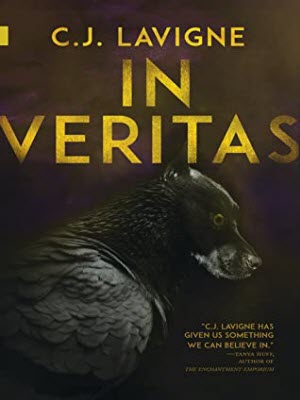 This year’s short list for the Crawford Award (for debut fantasy books) included a number of interesting books that I didn’t read. The Crawford doesn’t have a jury as such, it has a recommendation team who are not obliged to read everything that is eligible, but try to cover it all between them. Unfortunately for me, many of the recommendations tend to come in during January and February when I have little time to read due to LGBT History Month, and time is short because the Award has to be presented at ICFA. However, anything that turns up on the short list tends to be interesting, so I’m trying to get to the rest of it now.

In Veritas, by CJ Lavigne, is a book that I would not normally know anything about because it was published by a small press based in Edmonton, Canada. But it was brought to the attention of the Crawford Award, and I’m delighted that it was. I don’t know about you, but I can’t resist a book that introduces its main character as follows:

Verity is the drab sort of bleached that comes only with fading and time. She is wiry but solid. Her eyes are a grey like sunlit fog, simultaneously bright and opaque, but she seldom meets anyone’s gaze. She has a habit of twitching at nothing, and her lips move as she walks. Though she is lean and nondescript—her black coat well made, her white sneakers unmarred—people sometimes give her spare change.

Verity, it turns out, is aptly named because she can sense truth. That’s because she perceives the world with a peculiar sort of synaesthesia that involves taste as well as colour. If someone says something untrue, she can tell by the taste of the words. Navigating the world with this sort of ability is not easy, but it is possible. Fortunately for Verity, she lives with Jacob, who is independently wealthy (this will be explained) but who has no idea what to do with his life. They try different jobs each day, and fail at most of them.

Their quiet, if somewhat bizarre, existence is destabilised when Verity meets a street magician whom she can tell performs actual magic. He has a dog, who is also a snake, who is also a shadow that might properly belong to the man. This leads her to meet a whole lot of other unusual people, including an angel with black wings, an unkillable sorceress, and a man who can control snowstorms. She also discovers a rock band called The Between whose albums are legendary, if unobtainable, and whose gigs are always cancelled.

Slowly but surely, the narrative, while never quite relinquishing its weird, liminal affect, resolves into an X-Men story. There are the good mutants, led by Colin, the angel; and there are the evil mutants, led by Privya, the sorceress. Verity is powerful, newly discovered mutant who must chose which side to support.

Except of course it isn’t that simple. The mutants, or rather magic wielders, are not hated and feared by ordinary people, they are under direct assault. The mundanes, if one most call them that, (Lavigne calls them “outsiders” for reasons you’ll need to read the book to find out) do not believe in magic. And we all know what happens to Tinkerbell when no one believes in magic.

These people—their way of knowing the world is more powerful than ours. There’s no room left for us to exist, the moment anyone notices us trying.

So yes, like the original X-Men, In Veritas is something of a queer allegory.

But it is worse, because the electrical devices in the outsider world actually cause magical people pain. For Verity’s people, the world is becoming uninhabitable. They must find a way to escape, or to tip the state of the world back in their favour.

One might suggest that they need to immanentize the eschaton through a massive act of human sacrifice coordinated via a rock concert, but Lavigne is probably too young to have read Illuminatus!

I totally understand that many people are bemused, if not annoyed, by the proliferation of awards in the speculative fiction world. But if an award can bring attention to books like this then it is doing a useful thing. Also, hooray for small presses.