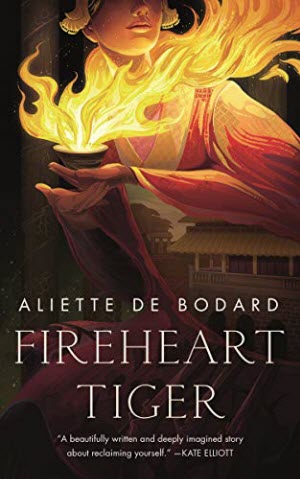 Did I mention that Aliette de Bodard keeps getting better with each new book? I’m pretty sure I said that in my review of Seven of Infinities. And now we have Fireheart Tiger. Guess what?

This is a short book, but beautifully formed. The basic plot is very simple. Thanh is a princess of Bìn Hải, a small country that is under the influence of a much more powerful country called Ephteria. She has spent some time at that country’s court (as a hostage) but is now back home and failing dismally to live up to her mother’s expectations of her. Now a trade delegation from Ephteria has arrived. Thanh is expected to help with the negotiations. But there is a problem. The Ephterian delegation includes the Princess Eldris, with whom Thanh had an affair while she was a hostage.

Oh, and there is the small matter that things keep spontaneously catching fire when Thanh is around.

That, basically, is all there is to it. Everything else is woven from the relationships between the characters. Thanh desperately wants to impress her mother, but doesn’t know how. The Empress of Bìn Hải despairs of her youngest daughter ever becoming proper princess material. The Ephterian trade delegation is annoyed that their demands are not being immediately met, with profuse apologies for them ever having had to make them in the first place. They are also annoyed that their future Queen has seen fit to tag along on a mission that she clearly has no interest in. Eldris expects the entire world to be arranged according to her whims, as it always has been, and always will be.

And the fire? The fire just wants to burn. It is what it does, with passion.

Primarily the story is a meditation on colonialism, though it could also be said that the Empress treats her daughter in much the same way that Ephteria treats Bìn Hải. The story also contains a certain amount of girls kissing (I wave at El Lam here, they will know why). There is only one man in the story, and he is a eunuch. All of these things are likely to irritate a certain type of reader. Which makes me even happier that this story is so beautifully written.