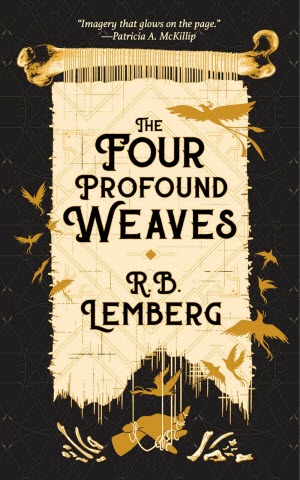 I’m always a little nervous approaching books centring trans characters that everyone else raves about. Of course I shouldn’t have been worried about RB Lemberg. They know what they are doing. But I was pleasantly surprised that there was so much more to The Four Profound Weaves than the trans elements.

One of the first things that strikes you about the book is that the two main protagonists, as well as both being trans, are both in their sixties. This in itself is rare enough but, as Gary Wolfe notes in his review for Locus, these are not the elderly but sprightly wizards who populate much of fantasy fiction, they are people who feel their age. Indeed, one of them, Uiziya, is ready to die.

More on that later, but first we need to understand a little of the world that Lemberg calls the Birdverse.

The action begins among the Surun’ people who live in a great desert. For the Surun’, changing gender is a routine business. They are also very comfortable with people being what they call “in-betweens”, and we would term “non-binary”. The Surun’ are also master weavers, and they practice the titular four profound weaves. The first of these, the weave of wind, is also the weave of change. Gender transition is accomplished with the aid of a magic carpet created using the wind weave.

In the same tent village lives a man who will have multiple names, but I shall call him nen-sasaïr as that is the name he has for most of the book. He is of the Khana people who live in a ghetto in the city of Iyar. Iyar society is structed along gender lines, transition is frowned upon, and women are not allowed to practice magic. The Khana are worse. Their society is full segregated, and the men live in a walled compound inside the ghetto, forbidden to interact with the outside world. Khana women have more freedom to travel, and this eventually allowed nen-sasaïr to live among the Surun’ and become the man he is now.

Uiziya, as is the Surun’ custom, transitioned in childhood and has mostly forgotten what it was like to live as a boy. Nen-sasaïr, on the other hand, is wracked with doubt and guilt, feeling himself an outsider everywhere. Later in the story he finally returns to Iyar and an elderly woman called Sulikhah gives him a chance to enter the Khana male compound, but to do so would mean he had to abandon Uiziya, who is wounded.

I snatched my hand away from the lock.
“The lock recognized you as a man, I saw. But you could not solve it?” asked Sulikhah.
“No, no, it was easy. I solved it. I just did not turn it all the way.” I took a breath. “But I need to go back. I cannot leave my companion, for she is sick and helpless.”
Sulikhah looked at me, her eyes shrouded. “And this is the nature of women. Always given too much to those in our care.”
“I am not a woman.”
She shrugged. “You were brought up to be one. These things are hard to erase, much as you change otherwise.”
This is not the nature of women, but rather the nature of all people who care. Uiziya had told me this once. “You can choose to care or not, and that is what people do.”

As I said, Lemberg understands the trans condition very well.

However, I get ahead of myself. There is another character that we must meet, our antagonist. The Ruler of Iyar, also known as The Collector, is a tyrannical despot whose goals in life include collecting powerful magical artefacts. Forty years ago he tricked nen-sasaïr into brining him Benesret’s finest work, her carpet of hope. Naturally that has not satisfied him. But he has reason for all this collecting. He sees himself as a protector of the world.

“Change is the world’s greatest danger. Around the world you and others, old woman, chafe at my rule, forever desiring a change, yet change destroys all. If not for that power of change, we would not need to die. But you people do not understand. You rebel, you wander from place to place, you chafe at my rule, thinking that something else, somewhere else, would be better. It isn’t. But I save you.”

At this point I remind you that the first of the four profound weaves is the weave of wind, which means change, and the Surun’ use that weave very specifically for gender transition. There is a reason why conservatives of all stripes hate trans people, because the change that we effect strikes deep at their ideas of the way the world should be, and they cannot countenance that.

I should note also that Lemberg is first and foremost a poet. They are, Wolfe thinks, the only person to be on the Crawford Award shortlist with a book of poetry. Now poetry isn’t really my thing, but prose written by people who are poets very much is. The Four Profound Weaves is a wonderfully lyrical book. It also has some marvellous fantasy imagery. I particularly loved the Ruler’s birdcage throne, and the Torturer’s iron rod.

On the subject of change, some of you may remember that argument from elsewhere:

The only lasting truth
Is Change.

Earthseed: The Books of the Living

That’s from Octavia Butler’s The Parable of the Sower, which makes very similar points. Lemberg adds the fact that without hope there cannot be change.

“The dawn is never far away” – RB Lemberg, The Four Profound Weaves

As for the weave of death, that too has a role to play. Uiziya explains:

To weave from death, you had to listen to the dead. To know them deeply, to attend to what had been silenced, to care enough to help the dead speak again through every thread that made up the great work.

Which is why I spend so much time working on queer history.

The quality of the novellas published in 2020 is amazing. This book is right up there with the best of them.