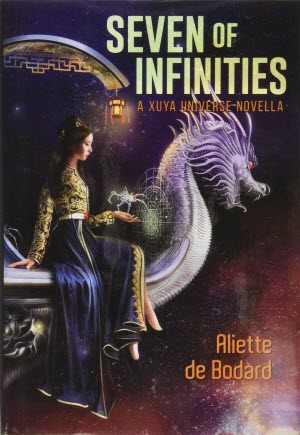 One of the things I enjoy most about reviewing books is seeing writers grow and blossom as their career develops. I have always enjoyed Aliette de Bodard’s work, but I have also seen her craft improve, year by year. As far as I’m concerned, Seven of Infinities is her best work to date.

I must admit that I had expected – perhaps even wanted – this novella to be a sequel to The Tea Master and the Detective, which I had very much enjoyed. It is not. Instead it is de Bodard revisiting the idea, and making an even better job of it. So once again we have a detective team involving a starship and a human woman. In this case our starship is Wild Orchid in the Sunless Woods, a mindship with a shady past who is finding retirement a little too boring for her tastes. Her plucky human companion is Vân, a poor scholar just about surviving as a teacher to the children of reach folks thanks to an artificial ancestor implant that she created when a student.

An artificial what? Here I must explain that this story is set in de Bodard’s Xuya universe, which is essentially Vietnamese empire in space. De Bodard has gone to a great deal of effort to make this a real Vietnamese culture, albeit one subtly adapted for a space opera setting. For Western readers, that makes aspects of the worldbuilding seem quite alien. And anyone who is upset by that has a very odd idea of what science fiction is all about.

Anyway, Vietnamese culture means reverence for one’s ancestors, and what better way to revere them than to upload their minds into silicon so that they can keep on advising you after their death? It sounds pretty horrific to me, but then I didn’t grow up in Vietnamese culture. The point is, however, that this has to be a real ancestor, not some AI cobbled together by an incredibly brilliant and desperately poor student. Faking an ancestor would be something like faking that you were descended from a Norman baron with a hereditary title, or for Australians faking that you had an ancestor who was transported from England for some minor crime.

So, the plot. One day Vân’s student receives a mysterious visitor. Uyên, the student, goes to make a pot of tea, and when she returns the visitor is dead. In another room, Vân is chatting with her friend, Sunless Woods, whom she knows through a poetry club. The pair answer Uyên’s cry for help, and the investigation begins. Through her underworld contacts, Sunless Woods soon realises that the dead woman was a criminal on a hunt for a missing treasure, but she doesn’t want her cute and innocent human friend caught up in all this nefarious activity. Meanwhile Vân is terrified of any publicity and involvement with the authorities that might expose her scandalous secret. When the criminals turn out to have a connection to some of Vân’s friends from her student days, things get very awkward indeed.

There are two things I love about this book. The first is the characters. Works of fiction often rely heavily on characters doing stupid things, and not talking to each other. Often when reading such works you end up shaking your head at how daft everyone has been. In Seven of Infinites de Bodard crafts her two principle characters so beautifully that there is never any doubt that they would do the daft things that they do. It is absolutely in their nature to do them.

The other thing is that the entire plot is deeply rooted in the nature of the Xuya universe. The twist ending, which is quite brilliant, would not work in a Western setting. In fact it would probably be laughable. But in Xuya it makes perfect sense and is exactly the right thing to have happened. That de Bodard has presented her world in such a way that we foreign interlopers understand that, and accept it, is a magnificent achievement.