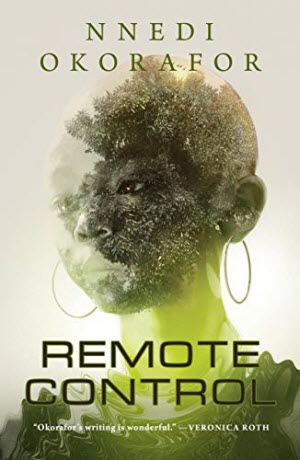 Lagoon is my favourite book by Nnedi Okorafor, so I was excited to find that her latest work is also set in Africa. Remote Control isn’t nearly as funny, but it is fascinating all the same.

The story concerns a young Muslim girl called Fatima who lives in a small town in Ghana. One day she witnesses a meteor storm, and soon after she finds a box containing a seed hidden beneath a tree. The tree appears to give the box to her. Previously Fatima had been a sickly child, but the box appears to do wonders for her health. Then one day a wealthy politician, a man with golden shoes, comes to visit her family. Fatima’s father sells him the box and he takes it away. Soon after, Fatima is almost run down in a traffic accident. Terrified, she lashes out with her mind. When she wakes up, everyone in the town is dead.

Distraught, Fatima takes to wandering the countryside, avoiding people as she learns to control the abilities her panic has unleashed. She takes the name of Sankofa, which is clearly significant. It is a word in the language of the Akan people of Ghana and literally it means “go back and get it”. More significantly it is associated with a proverb that goes something like, “It is not wrong to go back for that which you have forgotten.” The English version of that is, “Those who do not learn from history are doomed to repeat it.”

Sankofa, at least as much as I can learn from the internet, is a concept popular amongst the Ghanaian diaspora which encourages learning about their history. There’s a lot to learn. The Akan people were responsible for two of the great empires of Africa. The Ghana Empire dominated much of central west Africa for several hundred years in the first millennium CE. The Ashanti Empire controlled what is now modern Ghana from the 18th Century onwards and was only finally subdued by the British, after five wars, in 1902.

It isn’t entirely clear to me why Okorafor has chosen this piece of symbolism for the story, because the Sankofa of the story is very much a science fiction presence. There are fantasy-like elements to the story. She has a fox companion called Movenpick who follows her around and seems impervious to her powers. If you are wondering why he’s named after a Swiss brand of luxury ice cream, it is apparently because the ice cream company was bought up by Accor Hotels, and they have used the name for a luxury hotel chain, which is where Sankofa gets the name. But mostly this is a science fiction story.

The setting is the near future. We can tell that from the fact that Sankofa arrives in a place called Robotown that has a giant, AI-controlled robot as its police force. There Sankofa is befriended by a woman called Alhaja who has a business selling “jelli tellis” – TV sets that come in the form of a transparent film.

So Remote Control is about the past of Africa, but also about its future, and the deeply divided society that results from vast wealth pouring into the country from overseas. The text seems particularly dismissive of people who have acquired wealth and qualifications in America and have come home to lord it over those who have never left.

None of this tells us why the book is called Remote Control. That I will have to leave you to find out for yourselves and Okorafor slowly unravels the mystery of what happened to Fatima as a child. There’s a lot to think about in this book, and I’m not sure that I have understood it all yet, but that’s the mark of an excellent book.