Queen of the Conquered 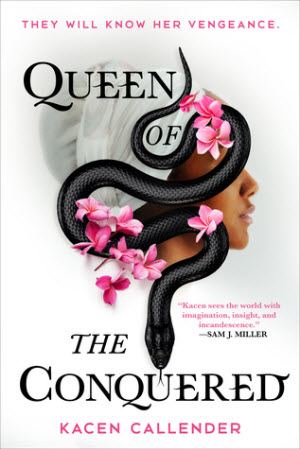 Among many remarkable things that happened in 2020, the World Fantasy Award for Best Novel was won by a YA book written by a non-binary person. That book was Queen of the Conquered, by Kacen Callender. It is a book I have been meaning to get to for some time, and it is indeed excellent. Callender looks like they will have a fine career ahead of them. I’d like you to take that as a given, dear reader, because I’m going to be slightly critical and I don’t want you to think that I didn’t like the book.

First up, I do sometimes despair of the publishing industry. Queen of the Conquered is marketed as YA. In the prologue there is a brutal massacre of a wealthy family and their servants, not to mention guests at a party they are throwing. The only survivors are a young girl who grows up to be our central character, Sigourney Rose, and her maid, Marieke. In the first chapter Sigourney, now a young woman with her own domain to rule, thinks about how much fun it is to have sex with her bodyguard. There’s little coming of age tale here, and most of what there is happens in backstory.

Sometimes I think that the only thing that distinguishes YA from the rest of the market is that YA editors are allowed much more free rein in the nature of the books that they commission. The suits and bean counters don’t care what gets published as YA because it is “for children”.

The setting for Queen of the Conquered is a fantasy version of the Caribbean which appears to have been colonised by something like the Danish or Dutch. Each island is ruled by a noble family, and each has an agricultural economy dependent on slavery. For complex historical reasons, one island is ruled by a Black family, the Roses. This, of course, is the reason for the massacre. But now Sigourney is back. She has already manipulated her way into being adopted as heir by one of the other white families, and has become fiancée to the heir of another. Now her ambition is to persuade the childless King to make her his heir.

How can she do this? Well, there is magic. Not many people have it, but Sigourney happens to have a very useful power. She can read and manipulate the minds of others. That’s how she has got where she is this far. The royalty thing will be a bit harder.

Every year the King invites the other families to stay with him on his island during Storm Season. This year he has promised to name an heir. Each of the nobles has a magical power of some sort, and many of them want the crown. So the book in effect becomes a country house murder mystery in which Sigourney has to find a way to defeat the powers of her rivals, and work out who is killing them off, in order to achieve her objective.

However, Queen of the Conquered is much more than that. It is a deep meditation on questions of privilege. Sigourney might be Black, but she also owns slaves. She has no hesitation in condemning them to death if they misbehave. She likes to think that she wants to become Queen in order to free her people, but they have no faith in her willingness to do so.

Without getting too spoilery, Callender has an excellent solution to this dilemma, but they don’t quite carry it off. For a country house murder mystery with a twist ending to work, the reader has to believe that at least one of the obvious suspects must be the murderer. This is where Queen of the Conquered falls down for me. It isn’t a serious fault, and if I hadn’t read as many novels as I have then I might not even have noticed it. Thankfully Callender looks to have a long and very successful career ahead of them. I’m sure they’ll get better at their craft. And I’m looking forward to the sequel to this book.