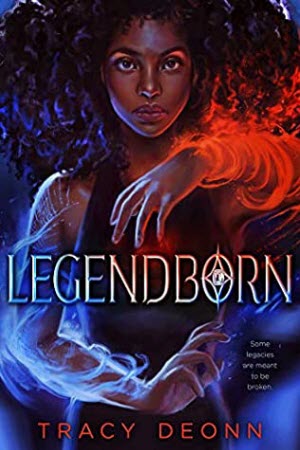 Arthuriana is something of a Vegemite subgenre. I know lots of people who absolutely loathe it. I, however, have Welsh parents, and was born just a few miles from Glastonbury. Arthur is in my blood, and I am a total sucker for new attempts to reinvent the genre.

Legendborn had the potential to be a complete disaster. It is an American college kids story, with a Black lead. Given how badly Americans often do British history, I was nervous. I might not have tried it at all had it not been for an enthusiastic recommendation from Charlie Jane Anders and Annalee Newitz on Our Opinions are Correct. Charlie Jane and Annalee are pretty good judges of fiction, and I am here to tell you that they were not wrong.

The story begins with two high school girls, Brianna and Alice, applying for something called Early College, which apparently means going to university early. I don’t know much about American high schools, apart from the fact that they are supposed to be the worst days of your life, and that if you go to one you are liable to eaten by zombies, or werewolves, or vampires, or cannibal serial killers. I can see why people want to get out of going to them. Early College may be something that Tracy Deonn made up, and I’m not quite sure why it was necessary to the plot for Bree and Alice to go to college younger than everyone else, but there we are.

By way of introduction, Alice is Asian-American and has the sort of parents who get you up at 6:00am on Sunday morning and put you through hours of extra homework because you are going to succeed in life or die trying. Bree is naturally clever and hasn’t had to study for an exam in her life. Also her mom went to the same college, which counts for a lot just as it would in the UK. They both get in easily.

While Alice’s parents are intensely proud of their daughter, Bree’s mom is furious. And then, before mother and daughter can make up, mom gets fridged. To be precise, Bree’s mother dies in a car accident. Bree and her father come to pay their respects at the hospital, and Bree becomes convinced that the police officer who tells them about the accident has somehow messed with her mind to cover something up.

There is a lot of mom-fridging in this book. Deonn explains why in an afterword. I totally understand. Legendborn is, in many ways, a book about grief and how one deals with it.

I don’t know much about American universities either, except that some people get paid absurd sums of money for playing sport, and everyone else joins secret societies with silly names and bizarre, humiliating initiation rituals. And yes, Legendborn did remind me a bit of Waking the Moon, which got it off to an excellent start.

In their first week in college, Bree and Alice get involved with some fairly wild kids and attend an illegal party in a local park. They get caught and put on report. Alice immediately buries herself in her work, but Bree, ever the rebel, does her best to avoid the older student that she has been assigned as a mentor. When he finally catches up with her, she discovers that he’s a tall, handsome and really rather cool white boy. Maybe being on report won’t be so bad after all.

Except that this Nick Davis is a member of a secret society called The Round Table, and they have some very odd rituals indeed. They even claim that their traditions date all the way back to 6th Century Wales, with bloodlines to match.

And that they fight demons.

All of this happens in the first couple of chapters, so the first thing you should know about Legendborn is that it is incredibly fast-paced. I really didn’t want to put it down, and tore through the book in a very small number of days.

From now on the main question is how well Deonn will adapt the Arthur mythos to modern day America. There are plenty of potential pitfalls. I’m pleased to say that she very clearly loves the source material (and blames Susan Cooper for this). Deonn does far better with the Matter of Prydain than any number of red-haired, white American women who parade their “Celtic” heritage.

The Charybdis to this Scylla is the risk of betraying her own people. The Arthurian legends are, after all, the property of the colonisers. To have Bree simply embrace them would be to ignore much of what has happened in world politics in the 15 centuries or so since Arthur’s supposed reign.

Deonn gets around this by rooting her story firmly in modern American politics. The young students who join the Round Table are mostly typical of their generation. Several are gay and lesbian, one is non-binary, and a couple are passing white. They don’t see why Nick hooking up with a young Black girl should be a problem. Their parents, on the other hand, and bearing in mind that the story is set in North Carolina, have probably voted Rethuglican with pride all their lives, including in the most recent election, and would happily pledge their swords to King Donald. The generational divide gives Bree a means of embracing the myth, without embracing the legacy.

There is, of course, also the question of how Bree fits into a very ancestry-driven society. Deonn finds a brilliant solution to this.

I have two other things that I’d like to mention that I particularly enjoyed. The first is that Deonn took the time to understand the Welsh language, including how it is pronounced. The other is that her characters are charming: they seem like a great bunch of kids that I’d love to hang out with were I not old enough to be their grandmother.

As is the way of things, in Arthuriana more than most, there will be sequels. It looks like there will be a properly Arthurian love triangle. I’m certainly looking forward to more books. But please don’t let the partial nature of the story stop you from putting this book on your Lodestar ballot. It is very much worth it. (Well, unless you hate Arthuriana, of course, in which case broadswords at dawn.)