When the Tiger Came Down the Mountain 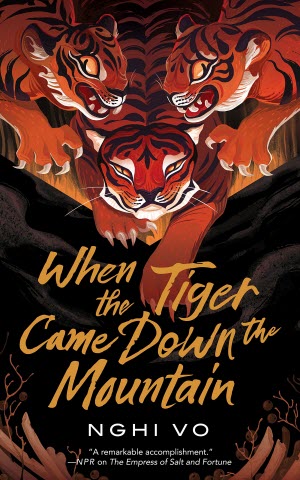 I loved The Empress of Salt and Fortune so much that on finishing it I immediately put Nghi Vo’s next book on pre-order. When the Tiger Came Down the Mountain is another book about the monk Chih from the Singing Hills monastery. It takes a very different approach to the first book, but is no less loveable.

As you may recall, Chih and their colleagues are experts in collecting oral histories and folktales. The Empress of Salt and Fortune was a complex tale of political intrigue, told by someone who witnessed the events first-hand. When the Tiger Came Down the Mountain is a more simple folk tale, presumably based on real events, but whose details are disputed depending on who is telling the tale. The new book also sees Chih without their faithful companion, the talking hoopoe, Almost Brilliant. She’s busy with a clutch of eggs and is unable to accompany Chih on this trip. I miss her snark, but it is just as well that she’s not there because her mouth would have got her eaten.

Chih is traveling in a mountainous region to the south of Anh, so think the Himalayas. Because travel is difficult, they have teamed up with a young woman who is part of the mammoth-riding corps. Piluk is only a small mammoth, nothing like the huge war beasts of the imperial army, but she’s more than useful in snowy, mountainous terrain, and perfect for Si-yu and Chih.

Or at least she would be in normal circumstances. Approaching the way station where they expect to spend the night, Piluk and her passengers are ambushed by three tigers. Tigers, of course, do not hunt in packs. Therefore these must be were tigers. Piluk gets the party to safety, but the tigers lay siege to them and Chih realises that their only hope is to try to charm the tigers with a story.

Thus we learn of the story of Ho Thi Thao, mighty queen of were tigers, and her love for the human scholar, Dieu. Chih is well versed in the version of the tale told among humans, but they correctly guess that among were tigers the story is told very differently.

Something that this book has in common with its predecessor is the beauty of language. Here Vo is describing Dieu’s childhood:

So in the end, there was only Dieu left, living in a tiny house in Hue County, being raised by a series of diligent tutors and compassionate maids. There was a hawthorn tree in the front, a tiny garden in the back, and a wind from the north that seemed to blow as much good as bad. The house was rented, so she truly possessed only a few treasured books, a face that was long and oval like a grain of rice, a mouth that smiled rather too little, and a little jade chip that guaranteed the bearer entry to the imperial examinations.

What’s new is, of course, the tigers. They are delightfully cat-like: at times sleepy, at times playful, always deadly.

The main question for me is, which of these two novellas I should put on my Hugo ballot? Or should I just do both of them?

I don’t think any more Singing Hills books are immediately forthcoming, but Vo has sold a couple of novels to Tor.com. The first one, The Chosen and the Beautiful, will be out next year. It is set in 1920s America, and is described as a decolonisation of The Great Gatsby. That sounds really interesting.