The Doors of Sleep 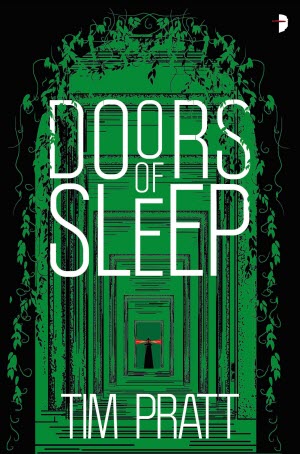 Angry Robot sent me an eARC of this one because I loved Tim Pratt’s Axiom series so much. I guess I should start by saying that The Doors of Sleep is nothing like the Axiom series. It is, however, fascinating. Let me explain.

Our main protagonist is Zaxony Dyad Euphony Delatree — Zax to his friends — and he’s a pretty ordinary bloke. On his home world he’s a social worker; his job is conflict mediation. So basically he gets paid for persuading people to be nice to each other. Then one day he gains a mysterious power. Each time he goes to sleep he wakes up on a different world, possibly in a different universe.

When we first meet Zax he has already been travelling the multiverse for several years. He has visited hundreds of worlds. He’s had a lot of narrow escapes, but thanks to his having acquired something called a ‘linguistic virus’ he’s able to survive on most of the worlds he visits without having to flee in panic. Sleeping pills are an important part of his travel kit.

I’d like to pause a moment to think about practical issues of novel writing here. First of all, there is worldbuilding to be done. In the course of the novel Zax visits over 100 different worlds, all of which have to be different and described in some way. Some of them only get a paragraph each. A few only get a sentence. But they all need to be imagined. That’s a tall order.

Then there is the question of plot. How can you build a coherent narrative when your hero only gets to spend a day in each world before moving on?

The answer appears to be to look to another fiction hero who has similar issues. I’m talking, of course, about Doctor Who. The Doctor does get a few episodes in each setting, but then she gets to move on to an entirely different one. Narrative coherency is provided in a number of ways.

Firstly there are companions. Zax has them too. He has discovered that if he falls asleep holding someone, that person travels with him. The only caveat is that they must be asleep too. Anyone who travels awake goes insane thanks to having seen Things That Man Was Never Meant To Know. By the time we meet Zax he has had several companions and is just about to say goodbye to one and pick up someone new.

The difference between Zax and The Doctor is that The Doctor is superbly competent, whereas Zax’s only skill is conflict mediation. The Doctor’s companions are often much less competent. Some have spent much of their time on the show screaming in fear. Zax is fortunate enough to pick up some very competent friends.

The first, the one he is about to meet, is called Minna, and she’s absolutely fascinating. Zax finds her on a farm world. She’s employed to tend crops by mysterious masters who make your average Victorian factory owner seem amazingly benevolent by comparison. Minna has been genetically engineered to make her better at her job, which gives her all sorts of plant-based superpowers. She’s basically a walking pharmacopoeia. Pratt does a wonderful job finding new ways for her to use her powers to get Zax out of sticky situations.

The other main companion doesn’t join the team until later. Victory-Three — Vicki to their friends — is a military AI from a world on which living beings seem to have exterminated each other. Being miraculous far-future tech, Vicki is able to travel in a crystal set in a ring. Why does Zax need a military AI? Well, that would be a spoiler.

The other thing that Doctor Who teaches us is that Zax needs a recurring antagonist, a version of The Master. So he has one. The Lector started out as a companion, but he’s a ruthless and fiendishly intelligent scientist who is determined to figure out the secrets of Zax’s multiverse hopping power and use that power to his advantage.

It took me a while to get into this book, because each chapter seemed to be a different story. But around half-way through we get the full backstory of Zax’s time with The Lector, and from them on I couldn’t put it down. Literally, I finished it in an evening, unable to go to sleep until I had got to the end.

I’m really impressed with what Tim Pratt has done here. He’s taken a totally off-the-wall concept that makes for all sorts of narrative problems and has made it work beautifully. The book doesn’t have the entertaining supporting cast of the Axiom books, and there’s nothing much in the way of relationship drama except between Zax and The Lector. But I think most of you will warm to Minna the way I did, and The Doors of Sleep is a very enjoyable book.