Miracles of Our Own Making 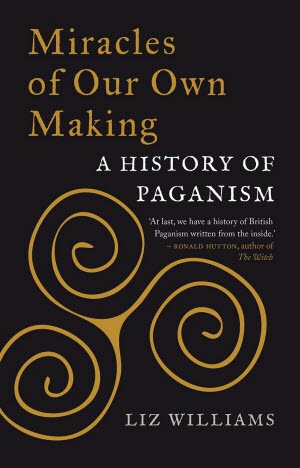 Having read Blackthorn Winter and been completely blindsided by bits of occult history I was unaware of, I figured that it was time to finally get on with reading Liz Williams’ history of British paganism. Miracles of Our Own Making is an ambitious project, tracing the history of pagan belief in these isles from pre-Roman times to the present day. Fortunately Williams has plenty of good previous research to draw on, in particular the excellent work of Ronald Hutton.

I have a few minor quibbles with the first chapter, but they don’t affect the subject of the book at all and I don’t expect many readers to know as much about Roman Britain as I do. Carolyne Larrington has blurbed the book, so I’m assuming that the second chapter, on Saxons and Vikings, is fine. From there we go quickly through the Middle Ages, where witch panics and sorcery don’t seem to have obsessed people much, and arrive in the Early Modern.

It is no accident, I suspect, that the rise of belief in things like alchemy and sorcery have paralleled the rise of science. These are all attempts to control the world through experiment. Some of it worked and has come down to us as True Knowledge; and some of it did not. At the time, those making the experiments gave equal weight to all unproven theories, and would undoubtedly deem electricity and wi-fi to be forms of magic. Heck, as late as Victorian times many people believed that Spiritualism was a valid science.

Alongside the practice of magic by the upper classes, we have the burgeoning belief in witchcraft, which Williams sensibly explains as being as much a social phenomenon as actual survival of ancient beliefs. In particular it is worth noting that in some parts of the world the majority of people executed for witchcraft were men.

Where the book really comes into its own is in the discussion of modern pagan practices. Williams’ survey of the field is peppered with comments such as, “I attended a ceremony of this type…”. Also, living in Glastonbury, she has easy access to a whole heap of pagan history, both written and oral.

The focus on Britain is probably necessary to constrain the scope, though I can’t be the only British person who read Margot Adler’s superb Drawing Down the Moon when it was first published. There is brief mention of the Illuminatus trilogy in the section on chaos magic, but a little more discussion of the links between the UK and USA might have been interesting. I was also slightly surprised not to see any mention of Colin Wilson’s The Occult, which was practically required reading in certain circles when I was a student.

Overall, however, Miracles of Our Own Making is a fascinating overview of pagan beliefs and practices in Britain, and would, I think be a useful starting reference work for anyone wishing to write historical fantasy set in this country.