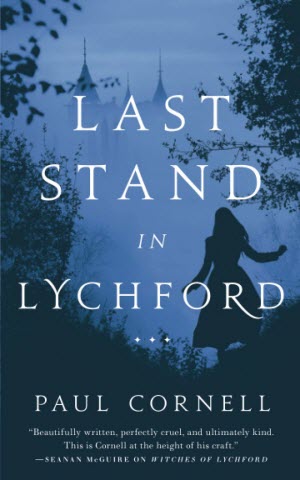 One of the few silver linings to the whole dreadful drift of the UK into a far-right dystopia has been the attempts by creative people to try to understand how it happened. Mike Harrison’s The Sunken Land Begins to Rise Again is one such attempt, but another that has received rather less critical attention is Paul Cornell’s Witches of Lychford novellas.

Of course with one instalment coming out each year, just before Christmas, seeing the series as a whole is somewhat challenging, but it very much deserves to be seen as a single work (and I’m wondering if there is enough of it to qualify for the Best Series Hugo). Last Stand in Lychford is the final volume in the series. It follows on from the traumatic events of The Lights Go Out in Lychford, and sees the return of a villain from the first book in the series, the smarmy demon who calls himself D. Cummings.

David, that is. And he’s much better dressed that the other Cummings fellow. No self-respecting servant of Lucifer would ever be seen looking so slovenly.

If you have been following the series, you will know that Lizzie and Autumn will be pretty much on their own here. However, Cornell does introduce a new character. Entirely in keeping with the spirit of the rest of the series, Zoya Boyko is a single mother and a recent immigrant from the Ukraine. She’s someone who will not find life easy in a small English town. Net curtains will twitch. But she’s hard working and determined to do the best she can for her young daughter. If only it were possible to earn a decent living.

Very soon, however, earning a living will be the very last thing on the minds of the people of Lychford. Thanks to the thing with the rain in the previous book, most of them are now well aware that magic exists, which is just as well because someone is coming to town, and he’s not Santa Claus.

At the end of the previous book, Finn, the Prince of Faerie, exploded all over Lizzie’s kitchen. Neither she nor Autumn has any idea how to put him back together again. But clearly something is very wrong in the magical realms. There is a power grab in process, and Lychford is where it will all go down.

While the series does take a very hard look at England, in a very vicar-like “you need to think about your behaviour” sort of way, it is also notable for the way that Cornell allows perfectly ordinary people to be heroes. OK, so Judith and Autumn can actually do a small amount of magic, but Lizzie mainly has her faith to draw on, and none of them are what you might call athletic. That doesn’t matter. They get to save the world because they care about it, not because they can punch out the bad guys. Given that Cornell is most famous for writing comics, this is particularly pleasing.

I’m very fond of this series, and I am delighted to report that Cornell has done a fine job with the ending. The final few paragraphs brought a broad smile to my face. I had totally missed all the hints that Cornell had dropped through the book.

If you have been putting off trying these books until the whole story arc was available, now is a good time to buy. There is an omnibus edition available on Kindle for only £7. I very much hope that Tor.com will follow up with a paper edition sometime soon.