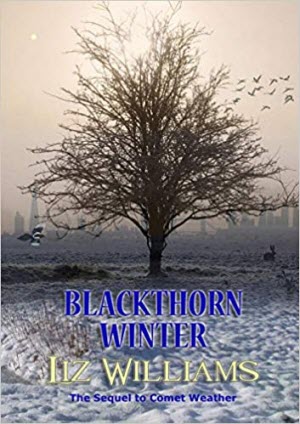 Comet Weather is one of my absolute favourite books of 2020, so when I discovered that NewCon Press was making the sequel available early I jumped at the opportunity to get hold of a copy. Officially the book isn’t out until next spring, but as it is set around the Christmas / New Year period, and he had copies available, Ian Whates decided to put it on sale.

Blackthorn Winter once again features the four Fallow sisters: Bee, Serena, Stella and Luna. Serena, you may remember, is a successful fashion designer. She’s also the toast of the tabloids, having just dumped rock star Ben Amberley for top Shakespearean actor, Ward Garner. As the story opens, someone breaks into Serena’s London home and trashes all the clothes she had made for her latest collection. That someone probably isn’t human.

As a popular DJ, Stella is always busy over New Year. This time she’s been booked for a mysterious gig, the location of which is being kept secret. She assumes it is some sort of rave. Then she gets a warning from a talking magpie.

Meanwhile Bee is back at the family home in Somerset. She’s hoping that the family will all get together for Christmas. She’s fairly confident about her sisters, but their mother has gone off who knows where again with only a vague promise to be home for the holidays. Then Bee finds a teenage girl sheltering in the local church yard. She’s probably a run-away, but she doesn’t speak English, and her skin is green.

Luna is still pregnant, so she and Sam are not planning to go very far. Unfortunately the world has other ideas. If she’s not traveling physically, well she’ll just get pushed off to some other world, or other time. On one of these trips she narrowly escapes something that looks rather like the Wild Hunt. And one of the hunters appears to be her mother.

As you can see, there is plenty of plot. And I haven’t even mentioned that Ben has gone missing, or that a hot-shot financier wants to invest in Serena’s business, or that Stella makes a new friend with a passion for feeding stray cats.

Suffice it to say that Blackthorn Winter does not disappoint. There are some lovely real-world touches in it too. The church of All Hallows by the Tower is a real place and does have Roman remains in the crypt. The story of the Green Children of Woolpit is a real folk tale. And there’s other stuff too, which I can’t talk about. The ancient history bits I could see coming a mile off, because I am that sort of person. The more recent historical elements blindsided me completely, but would not have done so if I had read Williams’ history of paganism first.

I understand that there will be two more books in the series. I am very much looking forward to them. I’m also hoping to see Williams getting some proper recognition at last. Gary Wolfe reviewed Comet Weather, which should help, but the award-voting public is very fickle.