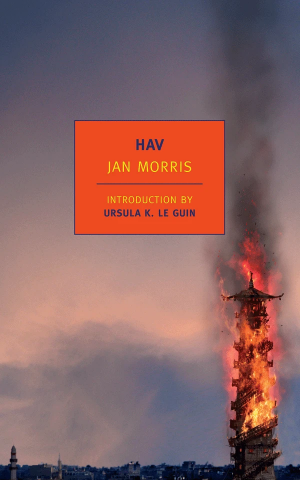 This review was originally published in issue #133 of Emerald City, dated September 2006. It is reprinted here to mark the death earlier this month of Jan Morris, at the magnificent age of 94.

At Worldcon I found myself on a panel about Cities in Science Fiction. We had a very successful discussion — it was one of the easiest moderating jobs I have ever had — but one thing I never quite got the panel round to talking about was just how you bring a city to life. Science fiction writers, in general, are good at talking about technology. Some of them are good with characters. But when they do sense of place they tend to do it more on the dramatic scale. Fantasy writers tend to be rather better with cities. Indeed, my first thought on being allocated the panel was that it should have been called Cities in Fantasy. And indeed we did talk about places such as New Crobuzon and Ambergris. Suppose, however, that you want to write about a city, but don’t quite know how. Sure, you can study Miéville and VanderMeer. But you might be better off reading a top class travel writer.

Jan Morris’ new book, Hav, was reviewed in The Guardian by Ursula Le Guin. I suspect that Morris’ publisher, Faber, would have been horrified. Morris, I hope, would have been flattered. But the book is about an imaginary place, so it does class as SF of a sort. Besides, someone at Waterstones obviously saw the review. I can think of no other explanation for the book turning up in the massive 3 for 2 sale of SF books that Waterstones have been running over the summer. And because it was in that sale I ended up buying it.

Morris is, of course, being coy when she starts her preface with an assertion that most people know the location of a place that she made up. It is fairly obvious that Hav is somewhere in the Eastern Mediterranean, but it isn’t until you are well into the book that Morris pins it down as being somewhere in Anatolia. (The early comment that Schliemann once considered it to be the site of Troy is a massive clue.) On the other hand, Morris did first write about Hav in 1985, in the book Last Letters from Hav, so perhaps she expects we have all read of it there. The new book, Hav, combines the earlier book with a newly written segment, Hav of the Myrmidons, which relates what happened to Hav after the coup that ended Morris’s earlier study of the city. If you already have Last Letters from Hav then the new book will be a poor bargain, because the new material is much the shorter part, but for new readers such as me the whole is a very satisfying read.

Hav, then, is a peninsula on the coast of Anatolia. Separated from Turkey by a massive escarpment, it has managed to maintain a modicum of political separation from the Ottoman Empire and its successor state. It has, however, been occupied by various colonial powers down the ages. The most recent occupiers were the Russians, whose nobility delighted in having a seaside resort on the Mediterranean. Hav was to Tsarist Russia what Monaco now is to Western Europe. Admiral Kolchak was supposedly the final governor of the city. Last Letters from Hav, therefore, is a delightful meditation on the decline of colonialism in post-WWII Europe. It is easy to imagine Jon Courtenay Grimwood setting a Raf novel in a future version of Hav where the Russians still hold sway.

The reason that Last Letters from Hav works so well is that Morris is a very fine travel writer. True to her genre, Morris frames the novel as a travel book that she herself has written following a professional visit to the city. She talks about arriving on the railroad that the Russians built, including a massive tunnel through the escarpment, about the local bureaucracy that a visitor must negotiate, about bars in which foreign visitors are made welcome. She tells us of the Kretevs, the tribal people who live in the escarpment and about the snow raspberry, the hugely expensive local delicacy that grows only in those mountains. There is the local custom of a dawn trumpet call dating back to the eviction of the Crusaders from the city by Saladin. And of course there is the Iron Dog, the giant bronze statue guarding the entrance to Hav’s harbor that was supposedly erected by the Spartans when they controlled the city.

Like any good travel writer, Morris talks about the local characters that she has met. Armand Sauvignon arrived as a young diplomat with the French administration in 1928 but has since built a successful career as a novelist. Mario Biancheri is the head chef of the Chinese-owned casino located in a small cove up the coast from the main city. Anna Novochka is an aged Russian aristocrat with tales of the glory days of Tsarist Hav. Perhaps the most famous resident is Nadik Abdulhamid, the 125th Caliph, heir to the Ottoman Sultanate and religious leader of the Sunni Muslims, a man who lives in perpetual fear of assassination.

Nor should we forget local customs. In Hav the foremost is the legendary roof race. This strenuous and often deadly contest involves the young men of the city racing across the roofs of the city, supposedly echoing a tradition dating back to a populist uprising against the Ottoman occupation of the city.

New Hav, the political entity that succeeded the Russian occupation, was a creation of the League of Nations. Somehow it survived the coming of the Nazis, though one Hav resident is, according to local rumor, still hunted by Mossad. However, Morris occasionally hears rumors of political unrest. Some of the local people are plotting revolution, and their secret society may date all the way back to the time of the Crusades. Morris finds herself ushered out of the city in secret, just in time to see warplanes flash across the city.

In the new book, Hav of the Myrmidons, Morris returns to Hav twenty years after her initial visit. The new political entity is an entirely different sort of beast. Hav is now a thoroughly modern tourist resort. Most visitors never leave the artificial island resort, now managed by Mario Biancheri, built in the center of the old harbor. The city has a new “history”, supposedly discovered in the ruins created during the coup. Hav, it transpires, was founded by the Myrmidon host after the death of Achilles at Troy. The city has a new logo of a Myrmidonic helmet, and a giant M dominates the city (a symbol that many claim actually stands for Monsanto whose genetically modified snow raspberries are the city’s major export).

Once again Morris is making comment on the political changes she has seen in the world during her travels. The post-colonial world of New Hav is long gone. Hav of the Myrmidons is thoroughly modern, thoroughly commercial, as artificial as Disneyland, and 100% guaranteed safe for nervous Western tourists. The latter part of the book is a lament for a real world vanishing under a flood of tourist destinations.

I think Hav will appeal most to lovers of alternate history. Morris mines the millennia of European tradition in order to sculpt her world. Everyone from Marco Polo to Sigmund Freud appears to have visited Hav at one time or another. But the book also provides a magnificent sense of place and would, I think, provide useful inspiration for anyone who needs to create a small city.